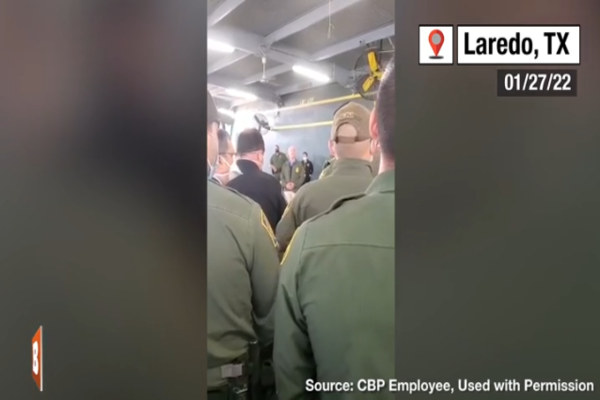 (breitbart) – A series of leaked audio and video conversations between rank-and-file Border Patrol agents and Department of Homeland Security leadership reveal that agents have grown tired of the Biden administration’s border policies. During several visits across the southwest border this week, Department of Homeland Security Secretary Alejandro Mayorkas and U.S. Border Patrol Chief Raul Ortiz received the brunt of pushback from frustrated agents.

In a Townhall exclusive report, a leaked audio recording reveals DHS Secretary Mayorkas’ acknowledging the frustrations and telling the agents, “The job has not gotten any easier over the last few months, and it was very, very difficult throughout 2021. I know apprehending families and kids is not what you signed up to do,” Mayorkas told the agents.

On Wednesday, Mayorkas told agents he appreciated their candor, as he was asked how DHS can reconcile saying border security is the Border Patrol’s main mission, yet they are unable to patrol the border due to the lax immigration policies the Biden administration currently has in place. Mayorkas responded by saying “I know the policies of this administration are not particularly popular with U.S. Customs and Border Protection, but that’s the reality, and let’s see what we can do within the framework.”

Mayorkas told the agents DHS is trying to work with the Mexican government to stop the flow of immigrants before they reach the U.S. border. According to Townhall, the agent who asked the question then turned his back on Mayorkas. He responded by saying, “Let me just say, you can turn your back on me, but I’ll never turn my back on you.” The agent responded by saying Mayorkas turned his back on the agents first.

Agents also addressed concerns about facility overcrowding and that they have been demonized by politicians while doing their jobs — perhaps referring to allegations against the agency’s mounted horse patrol earlier this year. In that instance, agents on horseback in Del Rio, Texas, were accused of whipping Haitian migrants.

In a leaked video recording on Thursday, Border Patrol agents in Laredo, Texas, engaged in a tense exchange with Border Patrol Chief Raul Ortiz after expressing concerns about morale to Secretary Mayorkas. The secretary quickly handed the question off to Chief Ortiz.

Chief Ortiz responded to the question by attempting to address employee resiliency issues and the need for new programs designed to help agents with mental and physical preparedness. Ortiz told the Border Patrol agents, “We tear each other down instead of building each other up.”

Ortiz pressed the agent saying, “I get it, you come to work, you’re frustrated. You’re upset because you didn’t get the desired outcome that you want. Doesn’t mean you give up.” The exchange became heated as the agent responded by saying, “I’m not.”

As Ortiz told the agents that they all raised their hands and signed up to do what is being asked of them. One agent interrupted to say, “To defend the Constitution.” At one point, another agent told Ortiz, “You keep releasing criminal aliens into the country.”

One Border Patrol agent told Ortiz, “For evil to triumph is for good men to do nothing. That’s exactly what’s happening here. Good men are doing nothing! You’re allowing illegal aliens to be dropped off in communities.” Shortly afterward, a comment concerning funding and new vehicles broke the tension.

A source within the Border Patrol told Breitbart Texas that another visit at the Laredo South Border Patrol Station included similar exchanges between agents and Mayorkas. The source says, “Agents have had it. They’re fed up and are not going to remain silent any longer.”