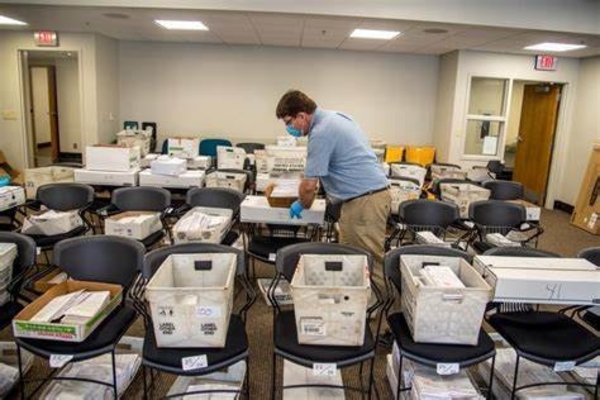 In Wisconsin’s 2020 presidential election, more than 1.6 million votes were cast. Biden’s certified margin of victory was just 1.2 percent of all votes cast.

“83K mail ballots went missing or undeliverable amid 20k vote margin of victory in WI 2020 Presidential,” the headline read in a statement that accompanied the release of a report by PILF on Friday morning.

“We now know the cost of the rush to mail balloting – lost ballots. The federal data show the 2020 election had more mail ballots that were never counted than the margin of victory in the Presidential election in Wisconsin. This isn’t the way to run an election. Mail ballots invite error, disenfranchisement of voters, and puts the inept U.S. Post Office determining the outcome of elections,” PILF President J. Christian Adams said in the statement.

The report showed that, unlike 2012 and 2016, the number of “missing or undeliverable” mail ballots in 2020 exceeded the election margin of victory to determine which candidate would be awarded the ten electoral college votes of the state.

For instance, in 2020, there were 1.4 million ballots that were mailed to voters in Wisconsin, which was 86 percent of the 1.6 million votes cast.

Of the 1.4 million ballots mailed, those classified as “unknown” were 76,308, while those classified as “undeliverable” were 6,458. When those two classifications are combined, 82,766 mail ballots were either “unknown” or “undeliverable,” this figure is 400 percent greater than Biden’s state-certified vote of 20,682 margin of victory over former President Donald Trump.

Of those 158,846 ballots mailed, those classified as “unknown” were 11,138, while those classified as “undeliverable” were 1,846. When those two classifications are combined, 12,984 mail ballots were either “unknown” or “undeliverable,” which is only 47 percent of Donald Trump’s state-certified vote of 27,257 margin of victory over Hillary Clinton.

The PILF report highlighted the significant differences between 2020 and 2016\2012:

Unlike other states its size with an influence in national politics, Wisconsin could brag about the fact that its counts of undeliverable and “unknown” mail ballots never inundated the margin of victory for a statewide candidate—until the 2020 Election. Expanded vote-by-mail efforts create stress tests on a state’s voter registration list maintenance system and reveal if investments in ballot chains of custody were effective.

The report concluded, “When Wisconsin loses track of more ballots than the difference between winning and losing its Electoral College votes, that is a core system failure.”