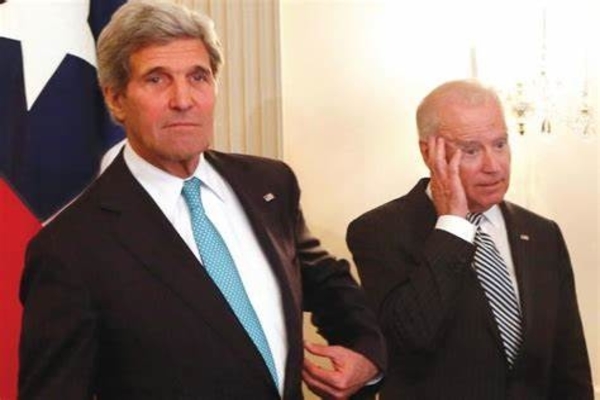 Key members of the GOP call for an investigation or resignation of Biden’s Climate Czar John Kerry. Following reports of information leaked by former U.S. Secretary of State Kerry regarding covert Israeli military operations to Iran.

State Department spokesperson Ned Price told reporters that he couldn’t speak to the “authenticity,” “accuracy,” or “any motives” behind the dissemination of the tape, as it is “purportedly leaked material.”

“I would just make the broad point that if you go back and look at press reporting from the time, this certainly was not secret, and governments that were involved were speaking to this publicly on the record,” he added.

Key members of the GOP, however, are calling for action.

“If this tape is verified, it would signal catastrophic and disqualifying recklessness by Envoy Kerry to Foreign Minister Zarif that endangered the safety of Americans and our allies,” Sen. Ted Cruz (R-TX) told the Daily Wire.

“And it would be consistent with his long pattern of empowering Iran’s regime,” he continued, noting Kerry:

poured hundreds of billions of dollars into the Ayatollah’s terrorist bank accounts, was a close confidant with Zarif during the Obama administration, and was caught repeatedly meeting with him during the Trump administration (notwithstanding the Logan Act) — and has never publicly accounted for what they discussed.

“Enough is enough,” Sullivan said on the Senate floor:

The red line that was crossed, if this was true, revealing secret information to one of America’s most sworn enemies with the blood of thousands of American military members on its hands, undermining the interests of one of our most important allies, the state of Israel — if this is true, John Kerry needs to go. He should resign or he should get fired by the president of the United States.

Former Secretary of State Mike Pompeo said the revelation confirmed: “what I’ve said for years: That [Zarif] continued to engage with former secretary of state Kerry on policy matters after Kerry’s public service and, according to Zarif, Kerry informed the Iranians of Israeli operations.”

“Before we cut a deal with Iran that reduces Americans’ security, it would be good to know what the arrangement, if any, may have been between these two leaders,” he added.

Sen. Rick Scott (R-FL) called on Biden to remove Kerry from “all access to and briefings on national security intelligence” until the truth is revealed. If, in fact, it proves to be true, Kerry must resign, Scott said:

“This is a criminal act and John Kerry must be immediately investigated and PROSECUTED,” Rep. Elise Stefanik (R-NY) said, also calling on Biden to “immediately remove John Kerry from any government or advisory position”:

“Imagine for a second a Trump official sitting on the NSC, like Kerry does, told Iran details about Israeli strikes?” Donald Trump Jr. said, predicting the media would react in an entirely different manner.

“I believe the media would be screaming TREASON and they wouldn’t be too far off, but of course they’ll say and do nothing because they’re useless propagandists,” he remarked:

Sen. Marsha Blackburn (R-TN) did not mince words, calling for Kerry to “seriously consider resignation” if the reports prove to be true:

“This is disgusting on many levels,” former U.S. ambassador to the U.N. Nikki Haley said.

“Biden and Kerry have to answer for why Kerry would be tipping off Iran, the number one sponsor of terror, while stabbing one of our greatest partners, Israel, in the back,” she added:

“Who would do this to an American ally? If it’s not true, Iran lies to stir the pot. Why would the US do a deal with Iran when we know they’re liars?” he asked: