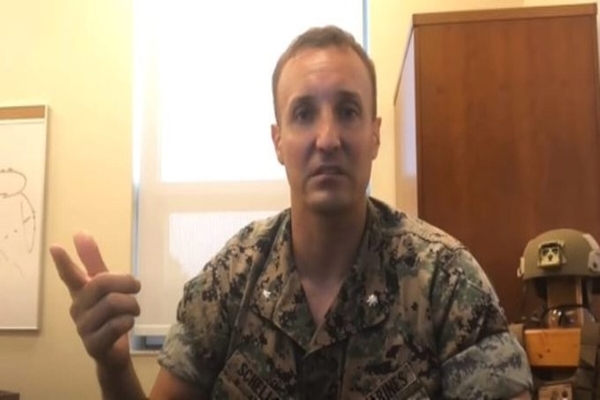 Despite nearly $2 million in donations from the MAGA Trump supporters raised to help with legal costs, Lt. Col. Stuart Scheller publicly rejected help from the former president and his son, stating he would “rather sit in jail” than accept their support.

Scheller became known following his public criticism of the Biden administration’s botched withdrawal from Afghanistan and demanding accountability from senior leadership. Scheller, with 17 years of service, was fired after his post went viral. A Marine Corp spokesperson confirmed that Scheller was placed in the brig while waiting for a preliminary hearing.

The Pipe Hitter Foundation set up a fundraiser for Scheller, and it has raised over $2 million. As Insider noted, the foundation is “run by former Navy Seal Eddie Gallagher, who was convicted in 2019 after posing with the dead body of an ISIS captive” until he was granted clemency in November 2020 by former President Trump.

Before his arrest, Scheller criticized various political and military figures on Facebook, including former President Trump and Gen. Michael Flynn:

President Trump. I was told by everyone to kiss the ring because of your following and power. I refuse. While I respect your foreign policy positions, I hate how you divided the country. I don’t need or want your help. You do not have the ability to pull US together. You may even win the next election. But your generation’s time is running out. Tell your son to stop tweeting about me. Your whole family knows nothing about US or our sacrifices. I could never work with you. I’d rather sit in jail and be released with a dishonorable than make compromises in my beliefs.

On the day following, Scheller made it clear he did not mean to say that President Trump had divided the nation himself, only that he “is incapable of bringing us back together”:

I’ve had such a strong reaction to my comments against President Trump I felt a follow up clarification was required. No, President Trump didn’t divide the country. But President Trump, in my humble opinion, is incapable of bringing us back together. Did he expose the corruption in the DOJ, media, and other places… yes. Was he the right person to expose the corruption at that time… maybe. Is he honest, accountable, and full of integrity… no. Would I want to work for a leader like that… no. I want a leader that will bring US together. Someone who has the courage to defend our country when called. My sons deserve that type of leader running the country in the future. That type of person is the only leader who I want in my corner. I respect all opinions. I’m not asking you to agree with me, but to at least consider my perspective. Much love.

Republicans and Trump supporters continue to show support and demand his release, despite Scheller’s views on former President Trump.