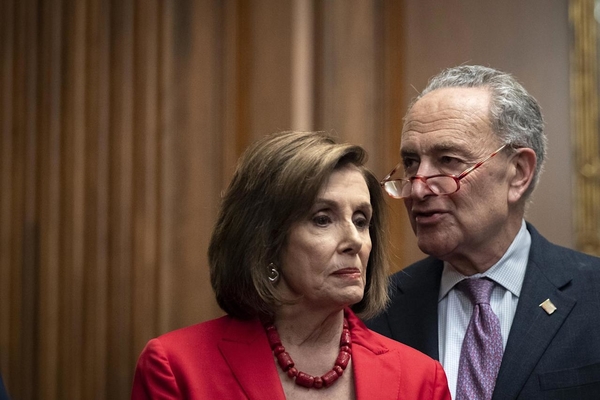 “She had no knowledge of that until this week,” Dingell said of the senators’ agreement that was revealed Thursday.

The document signed by Schumer and Manchin states the “topline” number for the reconciliation package is $1.5 trillion, with package debate beginning no later than October 1. The document also stipulates agreement to raise the corporate tax to 25 percent, a top tax rate on income to 39.6percent, and the capital gains tax rate to 28 percent.

It is a mystery why Schumer would withhold the signed promise from Pelosi. It is likely the surprise agreement was not received well by the House speaker, as House Democrats seek assurances the reconciliation package would include many radical measures.

Though Manchin’s agreement with Schumer includes tax hikes and $1.5 trillion in spending on top of the $1.2 “bipartisan” infrastructure bill, the far-left in the House have said the original $3.5 trillion topline number is not enough spending and falls short of the assurances they seek.

The far-left opposes the “bipartisan” bill until the reconciliation package framework is hammered out.

“I have never seen our caucus so strong,” Jayapal said about the opposition to the “bipartisan” bill. “And I’m a very good vote counter, also, maybe not quite as good as Nancy Pelosi sometimes, but I’m excellent.”

Jayapal’s warning to Pelosi is consistent with Sen. Bernie Sanders’s (I-VT) critique on Pelosi’s strategy of passing the radical agenda of President Biden on Thursday.

“It is an absurd way to do business, to be negotiating a multi trillion dollar bill. A few minutes before a major vote with virtually nobody knowing what’s going on,” Bernie told reporters. “That’s unacceptable.”

Pelosi did not proceed on Thursday because of infighting and the secret document between Schumer and Manchin, even though she promised a vote on the bill. Also, a mystery if Friday will bring any resolution to the infighting or produce a vote on the “bipartisan” bill.