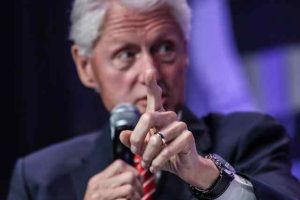 Anchor Jake Tapper said, “President Trump has vowed to nominate a woman this week to fill that slot on the Supreme Court. What’s your reaction?”

Clinton said, “Well, of course, it’s superficially hypocritical, isn’t it? Mitch McConnell wouldn’t give President Obama’s nominee Merrick Garland a hearing ten months before the president’s election. And that meant that we went a long time with eight judges on the court. This is what they do. I think both for Senator McConnell and President Trump. Their first value is power, and they’re trying to fill the court with as many ideological judges as they can. But to be fair, there is a case to be made for the argument McConnell made that in the middle of a presidential season, you should give the voters a say — that’s what he said when it was 10 months away. But when the shoe’s on the other foot, and he wants to judge, we’re fewer than 50 days away, and that argument doesn’t cut any mustard.”

He added, “So, it’s going to further spread cynicism in our system. And, you know, he said he wouldn’t do it.”