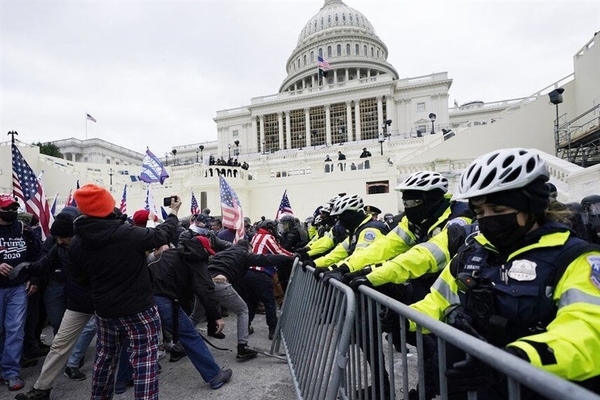 The report was issued by the Senate Homeland Security and Rules Committees, focused on security, planning, and response failures of the entities directly responsible for the security of the Capitol –  the United States Capitol Police (USCP) and the Capitol Police Board, which is comprised of the House and Senate Sergeants at Arms and the Architect of the Capitol as voting members, and the USCP Chief as a non-voting member.

“Critical breakdowns” were also looked into between the Federal Bureau of Investigation, Department of Homeland Security and Department of Defense recommendations were made to address the failures.

The FBI and DHS were faulted for not issuing a threat assessment warning or potential violence that targeted the Capitol on January 6.

The USCP’s intelligence components were also faulted for failing to convey the full scope of threat information they possessed. For example, its lead intell component  was aware of the potential violence weeks ahead of January 6 but “failed to fully incorporate this information into all of its internal assessments about January 6 and the Joint Session.”

The report said, “USCP was not adequately prepared to prevent or respond to the January 6 security threats, which contributed to the breach of the Capitol,” and that its leadership failed to prepare a department-wide operational plan or a comprehensive staffing plan for the Joint Session. The report said it also failed to provide front-line offices with effective protective equipment or training.

According to the report, only four of seven special Civil Disturbance Unit (CDU) platoons activated had special protective equipment; they were not authorized to wear the equipment at the beginning of their shifts.  One platoon, while trying to access the gear, found it locked in a bus. In addition, many of the front-line officers did not receive training in basic civil disturbance tactics since initial training.  Furthermore, the USCP’s leadership failed to communicate clearly during the attack; they “gathered in a command center, blocks away from the Capitol building.”

According to the report:

Due to the lack of phone call transcriptions, the report could not pinpoint at what time Sund made the request on January 6.  After the request was made, the DOD required time to gather, equip, and instruct personnel on the mission, which according to the report, added additional delays. In addition, before January 6, USCP informed DOD officials on two separate occasions that it was not seeking DCNG assistance for the Joint Session of Congress.

The report said DOD officials claimed to receive a “workable” assistance request from USCP at approximately 2:30 pm.  The request was approved by the Acting Secretary of Defense at approximately 3:00 pm.  For the next ninety minutes, DOD officials ordered DCNG  personnel to the Armory, obtain gear, and prepare for deployment as leaders prepared the mission plan.

The report said, “DOD and DCNG have conflicting records of when orders and authorizations were given, and no one could explain why DCNG did not deploy until after 5:00 pm.”

The report faulted DOD for spending hours “mission planning.” After Miller gave his approval, McCarthy colocated with D.C.officials to develop a concept of operations for the DCNG and believed he needed Miller’s approval for it. His plan was approved, and the DCNG was authorized to deploy at 4:35 pm.

The report summary said, “Miscommunication and confusion during response preparations, demonstrated by conflicting records about who authorized deployment and at what time, contributed to the delayed deployment.”