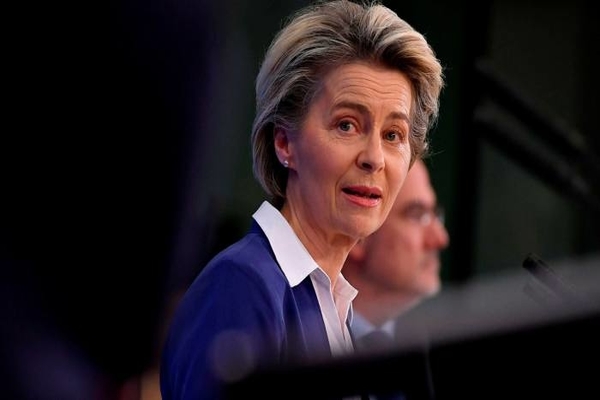 After struggling to blame the bloc’s disastrous inoculation program on drug company AstraZeneca, Ursula von der Leyen is now claiming the EU should be proud of being so far behind the United Kingdom, implying that Brexit Britain has compromised on safety to become the Western world’s first to approve a vaccine for the Chinese coronavirus.

The president of the European Commission, the EU’s powerful executive arm, has been criticized at home for overseeing the delays in securing contracts with drug companies resulting in fewer than three percent on average of EU-27 residents receiving even their first dose. The UK in contrast has injected almost 14.5 percent.

“I understand the anger and the emotion. But I am convinced that the European vaccination strategy is the right one,” Von der Leyen told European newspapers. Rather than accepting the blame for what one German editor branded the “biggest confidence destroying programme” in EU’s history..

Revealing that vaccine programmes will not begin in Europe in earnest until the spring, according to The Times, German defense minister said, “Some countries started to vaccinate a little before Europe, it is true. But they resorted to an emergency, 24-hour marketing authorisation procedures.”

“The commission and the member states agreed not to compromise on the safety and efficacy requirements linked to the authorisation of a vaccine,” she said.

In addition, she added: “So, yes, Europe left it later, but it was the right decision. I remind you that a vaccine is the injection of an active biological substance into a healthy body. We are talking about mass vaccination here. It is a gigantic responsibility.”

Brussels has approved all three vaccines authorized for use in the UK in recent months, in fact, some cases just three weeks later. Approval in the UK of the Pfizer-BioNTech Vaccine December 2nd, with the EU’s European Medicines Agency (EMA) authorizing it on the 21st. The UK also gave a green light to the Moderna vaccine on January 8th, followed a day later by the bloc.

Britain signed off on the Oxford-AstraZeneca shot on December 30th. The safety-conscious bloc was in the throes of blocking AstraZeneca vaccines from export to the UK, demanding British made doses, and even ordered a raid on one of the pharmaceutical’s Belgian plants before the EMA has even authorized the product for use on January 29th.

Commission President von der Leyen downplayed what could have resulted in the breaching of the Belfast Agreement when she ordered-and then rescinded-an internal border on the isle of Ireland, saying “I know how sensitive the Irish subject is. But when you take urgent decisions -in this year of crisis, the commission has taken almost 900- there is always a risk of missing something.

Refusing to apologize for the bloc’s vaccine fiasco, the German politician has also said that she will not resign-despite being called for her to do so by diplomats in Brussels.

“Let’s wait until the end of the term to see the successes and mistakes and then we will take stock,” she said, according to The Telegraph. Mrs von der Leyen was appointed to head the Commission in 2019, and her term expires at the end of 2024.

The Belgium-born German politician was known in Germany for her procurement failures as defense minister, according to Bild political editor Peter Tiede, who wrote this week in the British press that the European Commission is where failed politicians from across the Continent are deposited like “nuclear waste”.

“Von der Leyen has either knowingly lied to 447 million Europeans or didn’t know what she was talking about. Both are intolerable,” Mr. Tiede wrote in The Times.

He also criticized domestic European governments which “either did not intervene or intervened too late”, and which now must look on with embarrassment at the success of the United Kingdom, “the island that once belonged to our EU. It is embarrassing because now we are the fools.”