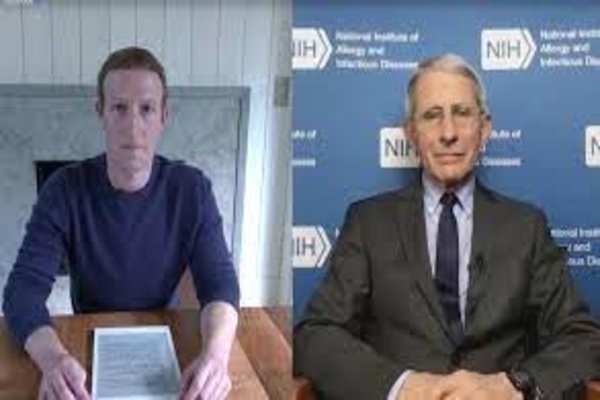 Facebook founder and CEO Mark Zuckerberg emailed NIAID director Tony Fauci thanking him for his “leadership” and alerting him of the Facebook’s coronaviurs information hub, which boosted “authoritve” informatin about the virus in the early months of the COVID-19 pandemic.

The emails show Zuckerberg requesting a video Q&A with Fauci because “people trust and want to hear from our experts rather than just a bunch of agencies and political leaders.

The emails were revealed through FOIA requests made by the Washington Post and Buzzfeed.

One paragraph of the email was redacted with FOIA exemption code b(4), meaning it contains “trade secrets and commercial or financial information obtained from a person [that is] privileged or confidential.”

I wanted to send a note of thanks for your leadership and everything you’re doing to make our country’s response to this outbreak as effective as possible. I also wanted to share a few ideas of ways we could help you get your message out, but I understand you’re incredibly busy, so don’t feel a need to reply unless these seem interesting.

This isn’t public yet, but we’re building a Coronavirus information Hub that we’re going to put at the top of Facebook for everyone (200+ million Americans, 2.5 billion people worldwide) with two goals (1) make sure people can get authoritative information from reliable sources and (2) encourage people to practice social distance and give people ideas for doing this using internet tools. This will be live within the next 48 hours.

As a central part of this hub, I think it would be useful to include a video from you because people trust and want to hear from our experts rather than just a bunch of agencies and political leaders. This could be done in a number of formats if you’re open to it. Probably best would be recording a Q&A where you answer people’s top questions, but we’d be open to other formats too.

I’m also doing a series of livestreamed Q&As with health experts to try to use my large following on the platform (100 million followers) to get authoritative information out as well. I’d love to have you do one of these Q&AS. This could be the video we put in the Coronavirus Hub, or it could be a different thing that we distribute separately, but I think it could be effective as well.

Again, I know you’re incredibly busy, so don’t feel the need to respond if this doesn’t seem helpful. If it’s easy to talk live, give me a call anytime on my mobile phone: [REDACTED (b)(6)].

Thanks again for everything you’re doing.

In his response dated March 17, Fauci praised Zuckerberg’s planned COVID-19 information hub while also expressing his willingness to cooperate with the tech giant.

“Your idea and proposal sound terrific. I would be happy to do a video for your hub,” Fauci said. “We need to reach as many people as possible and convince them to take mitigation strategies seriously, or things will get much, much worse. Also, your idea about [REDACTED] is very exciting.”

While the nature of Zuckerberg’s additional offer to Fauci remains unknown, the redactions in question are classified as a b(4) exemption under the Freedom of Information Act (FOIA), which permits agencies to redact “trade secrets and commercial or financial information obtained from a person which is privileged or confidential.”