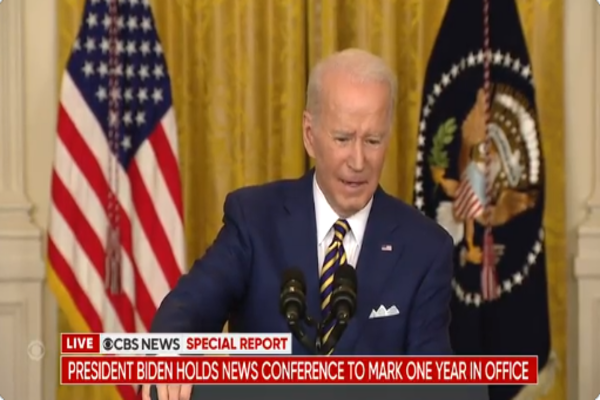 Much of the infighting is attributed to Biden’s Chief of Staff Ron Klain’s decision to keep Biden from being amongst the electorate in a “pragmatic” way, NBC News reported.

“Biden has strayed from his core brand as a pragmatic, empathetic politician who won the Democratic nomination as a moderate willing to compromise,” the report said, dissecting Klain’s micromanagement of the president.

As Biden’s Chief of Staff, Klain is the nucleus of office politics, which are said to be rife with “grumbling” “personal score-settling and constraints… on Biden’s ability to reach out,” though top White House officials denied the report.

When Biden was asked at Wednesday’s press conference about what his 2022 reset would entail, Biden blamed coronavirus and not Klain for his detachment from his pragmatic way of “connecting with people.”

“I find myself in a situation where I don’t get a chance to look people in the eye because of both Covid and things that are happening in Washington, to be able to go out and do the things that I’ve always been able to do pretty well — connect with people,” Biden claimed.

Biden’s decision to escape the White House and speak with Americans is reportedly not in line with Klain’s priorities.

Biden’s confidants told NBC News that “Klain knows Biden ‘can be influenced by his old friends,’ and that ‘frankly, he should be, because there’s a lot of experience there.’”

The report also accused Klain of giving “outsize credence to cable news and social media” and supported the claim with evidence of incessant tweeting and retweeting to pacify the media.

Klain’s reported strategy of keeping Biden away from his friends and the electorate comes as polling revealed 49 percent of Americans believe Biden is not mentally fit to be president.

Biden was asked about the dreadful polling during Wednesday’s two-hour-long press conference.

“I have no idea,” Biden responded to a question about why Americans believed he is not mentally fit.

The solo press conference was reportedly the sixth of his presidency.