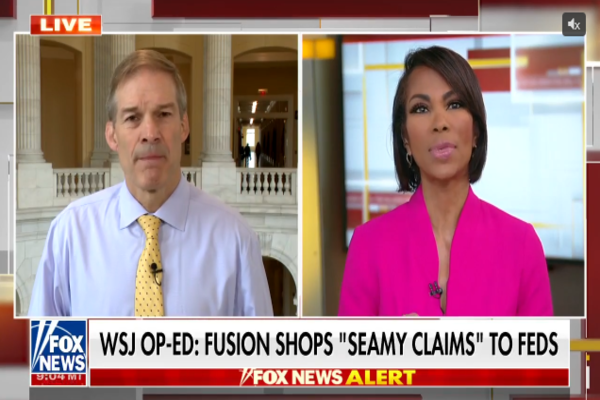 Jordan said the Steele dossier about then-candidate Donald Trump “was all made up.” He also questioned how the FBI was unaware that Sussmann was working for the Clinton campaign when he brought the leaked report to former FBI general counsel James Baker.

“I think the big takeaway here is four years ago — there was a bunch of us who thought this was all made up. Now we know for sure it was all made up,” Jordan declared. “And on Monday, we start to get some of the details that we didn’t know about that we haven’t learned about yet, so I think that is where this is going. We’ll see what comes out Monday. This idea to me has always been key is — how did the FBI not know what Sussmann brought them, when he brought in this material, that he wasn’t working for the Clinton campaign.”

“I mean, he sends an email to Jim Baker, the chief counsel of the FBI; the next day, he shows and gives him information,” he continued. “How did Jim Baker not know that he was working for the Clinton campaign? So, I find that the interesting part of all this. We’ll see if that comes out in any way in the trial. But we begin to get the details Monday. But we have suspected, and now we know for sure … the dossier was made up and the whole Trump communication with the Alfa Bank … was made up as well.”