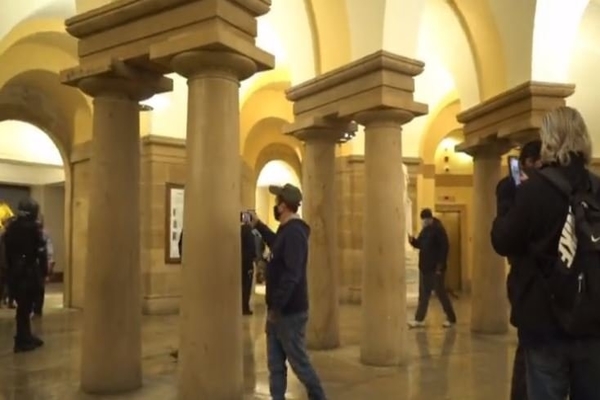 Finally, released videos from January 6, the Democrat called “insurrection” or “coup,” show calm protesters strolling through open doors at the U.S. Capitol, with the evident support of police on the scene.

For months, the U.S. Attorney’s office has tried to suppress this footage while waging their propaganda campaign with the media to paint Trump supporters as terrorist threats. However, now even the deep state is conceding there was no planned insurrection on January 6.

Big League Politics has reported on how the FBI was forced to admit that no insurrection ever took place on January 6:

“The Federal Bureau of Investigation (FBI) is admitting there is no evidence of any insurrection or coup plot regarding the January 6 protest at the U.S. Capitol.

This admission drives a stake through the heart of the Democrats’ push to bring the war on terror to the homeland for use against their political opposition.

Reuters has talked to federal law enforcement officials to confirm that there is no proof showing that President Donald Trump or right-wing groups plotted a coup or insurrection in advance of the event. Instead, it was a mostly peaceful protest against election fraud.

“Ninety to ninety-five percent of these are one-off cases,” said a former senior law enforcement official with knowledge of the investigation. “Then you have five percent, maybe, of these militia groups that were more closely organized. But there was no grand scheme with Roger Stone and Alex Jones and all of these people to storm the Capitol and take hostages.”

While specific individuals may have shown up ready and willing to commit violence, there was no coordinated plot to overthrow the government or attack the U.S. Capitol.”

The leftist narrative about January 6. is imploding.