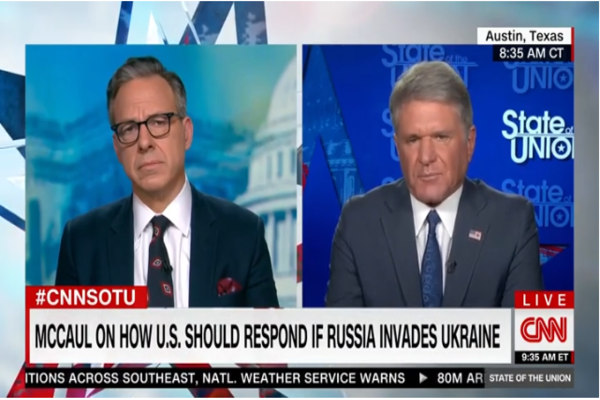 (breitbart) – Representative Michael McCaul (R-TX) said Sunday on CNN’s “State of the Union” that the United States was in a “new cold war” with Russia.

Discussing Russia gathering troops on its border with Ukraine, McCaul said, “I’m seeing tough rhetoric but not a lot of action. I talked to Deputy Secretary Wendy Sherman prior to her negotiations that. You know, you have to put things on the table, like sanctions. You have to talk about more arms sales, weapon sales to Ukraine, and this Nord Stream.”

Anchor Jake Tapper asked, “Do you think we are in a new cold war with Russia?”

McCaul said, “I do. I do because I think Putin again smells weakness here. He knows that if he’s ever going to invade Ukraine, now is the time. I hope he doesn’t make that miscalculation, but the fact is, if he does invade Ukraine, what is the United States, what is our commander in chief prepared to do to stop it? I’m not seeing a lot of details or action that could deter him from that critical step. This would be the largest invasion in Europe since World War II. That’s how big of a deal this is.”