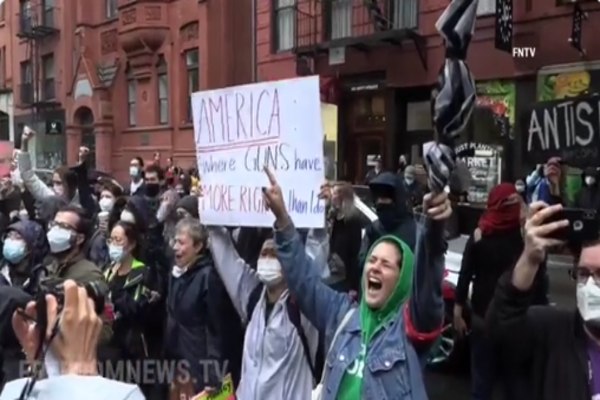 Pro-Life Catholics in the community have gathered for Mass and a rosary procession to a Planned Parenthood one block away from the church nearly every month for the past 14 years to protest this nation’s abortion laws. However, the group of Catholics were met by pro-abortion activists who blocked the church doors on Saturday.

The pro-abortion radicals were reportedly singing and chanting, “Thank God for abortion,” as they blocked the church’s entrance.

One protester, who reportedly goes by “Crackhead Barney,” arrived at the church doors in a bathing suit stuffed with baby dolls to mock pregnancy and abortion.

“Help me abort my babies,” she reportedly said as she danced on the floor in front of the church doors. This protester also reportedly “seemed to be looking for a fight,” and repeatedly called the church’s priest a “b**ch.”

As the National Review’s Kathryn Jean Lopez, who attended the protest, detailed:

The gal in the bathing suit certainly seemed to be looking for a fight, imploring the priest, Fr. Fidelis Moscinski, a Franciscan Friar of the Renewal — who she repeatedly referred to as “b**ch” — to come out and face her.

A few of us did make it over to Planned Parenthood. Fr. Fidelis in particular was continuously heckled. Childish stuff, mostly, making fun of the fact that his religious name is not his birth name.

Some Catholics on the scene kept calm and responded to the pro-abortion protesters by praying and singing hymns.

Pro-abortion activists have called for nationwide protests at churches this weekend after Justice Samuel Alito’s draft opinion was leaked on Monday. Alito’s draft comes to the “inescapable conclusion” that “a right to abortion is not deeply rooted in the Nation’s history and traditions.”