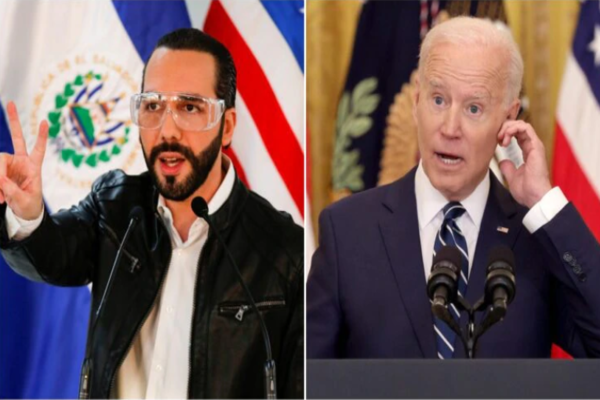 (bigleaguepolitics) – El Salvadorian President Nayib Bukele is warning U.S. taxpayers “that their government is using money to fund communist movements” in his country, but the attempted foreign intervention is unsuccessful.

“US taxpayers should know that their government is using their money to fund communist movements against a democratic elected (and with a 90% approval rating) government in El Salvador,” Bukele wrote in a tweet, adding that their plans are “not working though” and “the people of El Salvador won’t go back to that terrible past.”

He also posted some recent text transcripts appearing to show the U.S. government has been lying to the public about drug policy:

Bukele has also taken aim at the global financial system by embracing cryptocurrency, making Bitcoin acceptable as legal tender in his country, and planning a so-called “Bitcoin City” project:

Big League Politics has reported on other rebukes issued to the global elite by Bukele, particularly his admission that hydroxychloroquine works to combat COVID-19 and that most world leaders were taking it and purposefully misleading the public:

“Salvadoran President Nayib Bukele recently announced that he is taking hydroxychloroquine as a preventative measure to fend off COVID-19.

Bukele also claims that most world leaders are taking the controversial drug to keep themselves healthy amidst the China-caused pandemic:

The U.S. ambassador to El Salvador, Ronald Johnson, noted that he approves of Bukele’s decision to take the drug to protect himself from coronavirus.

“I believe that in crisis situations, oftentimes people must give up a little bit of their freedoms in order to favor the rights and freedoms of the majority and of the whole,” he said. “This is only a temporary moment.”

Bukele’s use of hydroxychloroquine vindicates President Trump’s use of the drug as a preventative measure to ward off COVID-19.“

Bukele would be wise to invest in heavy security detail that he can trust. He has to be a marked man from a global elite with much to lose if his economic ideas are implemented on a grand scale.