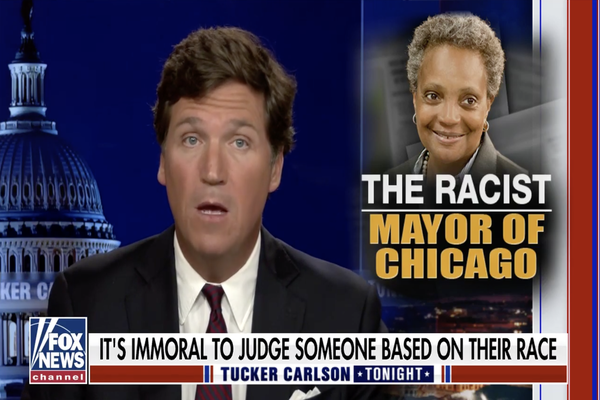 Tucker Carlson reacted to Chicago Mayor Lori Lightfoot (D), declaring she would prioritize black and brown journalists over white journalists in the name of racial “equity.”

CARLSON: For months now, privately, we’ve been searching for a meaningful definition of the word “equity.” We’ve consulted linguists, we’ve dusted off moldering reference books, and we’ve scoured the four corners of God’s own internet, all in an effort to figure out what equity is.

We’ve done this not for pleasure, we have hobbies, but because we feel it’s our duty as a news program. Equity is now the organizing principle of the United States of America.

On the very day he was inaugurated, Joe Biden signed Executive Order 13985. That Order makes equity mandatory across the Federal government in all the agencies. And yet strangely, neither Joe Biden nor anyone else in the administration has ever defined the word.

So what is equity? Well, tonight, finally, we know what it is. Equity, it turns out, is racism. It’s as simple as that. Equity is racism.

And to be clear, we don’t mean racism in the sense that ice cream and Shakespeare and math are all now supposedly racist or that Dr. Seuss is now considered an Exalted Cyclops in the Ku Klux Klan. We’re not talking about the Ilhan Omar “Atlantic” Magazine definition of racism, which by the way, isn’t actually language, but just another blunt political weapon. No, we mean racism in the literal sense in the way that Martin Luther King defined the term, which is the act of hurting some people and helping others purely on the basis of their respective races.

Bigotry, in other words, prejudice, hatred. That’s what equity is.

We know this thanks to Lori Lightfoot, Mayor of Chicago.

Earlier today, Lightfoot released a two-page Manifesto defining equity, quote: “Equity and inclusion are the North Stars of this administration.” Lightfoot explained. Then, she got specific about it, quote: “On the occasion of the two-year anniversary of my inauguration as mayor of this great city, I will be exclusively providing one-on-one interviews with journalists of color.”

So in the name of equity, Lori Lightfoot is refusing to grant interviews to white people. Lightfoot took pains to explain she doesn’t mean that personally. In fact, you can see that some of the white reporters who cover City Hall in Chicago are talented and hardworking.

But unfortunately, they are, Lightfoot said quote, “white nonetheless.”

So there it is, as plainly as anyone has ever said it out loud. White people are disqualified because they are white, not because of anything they have done or said or think; Lori Lightfoot doesn’t care about that. She says so.

Lightfoot is not interested in what these white people might be like as individuals, as people. She doesn’t even care what kind of white they are. Their ancestors could be from Italy or Luxembourg or Finland, or Spain. They could be members of the British Royal Family. They could be penniless Romanian immigrants living in a box on the sidewalk on Michigan Avenue.

Rich or poor, it doesn’t matter to Lori Lightfoot. To Lori Lightfoot, all that matters is the fact they are white because all white people are the same. They are entirely defined by the color of their skin. You can see how this makes life a little easier for Lori Lightfoot. She knows who to hate just by looking at them.

If someday, the Chicago Police rounded up the entire population of the city, Lori Lightfoot would have no trouble pulling the right ones out of line for punishment.

By the way, in case you’re wondering, yes, that was a Nazi reference. It was deserved.

Lori Lightfoot is a monster.

Any society that allows politicians to talk like this has a very ugly future ahead — very ugly.

But of course, no one said much at all about what Lori Lightfoot said in her Manifesto, even Chicago reporters, some of them could no longer do their jobs purely because of how they were born, offered only tepid complaints. Listen to this person from NBC.

MARY ANN AHERN, NBC NEWS REPORTER: Another reporter called and said, “Hey, I’m hearing they’re only talking to black or brown journalists.” And I said, “What?” It didn’t even sound real. And so I reached out to the communications director, Kate Lefurgy, and she texted me back and said, “Yes, that’s true.”

She said white reporters have been in the room for the majority of the year, and it’s time to hear from other people.

CARLSON: What? Can this be real? What you just heard was confusion, but not outrage. And yet, there’s nothing confusing about who Lori Lightfoot is.

Here’s the response from a reporter at “The Chicago Tribune,” quote: “I’m a Latino reporter whose interview request was granted for today. However, I asked the Mayor’s Office to lift its condition on others, and when they said no, we respectfully canceled. Politicians don’t get to choose who covers them.” End quote.

Talk about missing the point completely. And by the way, of course, politicians can choose who they talk to. All of us have that right, thank God. What politicians cannot do under any circumstances is attack an entire group of citizens on the basis of their skin color.

Again, to restate the obvious, that is racism. It is immoral. It is also illegal under countless State and Federal laws.

We are not supposed to allow behavior like that from our government. We are all equal in the eyes of law; we are all citizens. We’ve got an entire granite monument on the National Mall in Washington promising that we will never behave that way again; we will never allow it. But because we’ve embraced equity, we’re not simply allowing it; we are encouraging it.

Meanwhile, how is Chicago? The City of Chicago under Lori Lightfoot is crumbling. Murders last year jumped to 50 percent. Hundreds more dead, many of them young people, children, most of them black. Is that social justice? No, it’s not. It’s no one’s definition of social justice.

Not surprisingly, Lori Lightfoot doesn’t want to talk about it.

There are 50 members of the City Council in Chicago. They’re called aldermen. One of them, an alderman called Raymond Lopez, has repeatedly pressed Lori Lightfoot to explain what she is doing to the city. You should know that Raymond Lopez is not a right-winger. He’s a Democrat. He represents the 15th Ward, which is overwhelmingly non-white; in some places, it is impoverished.

But Raymond Lopez cares a lot about his constituents. So in January, he raised an obvious point with the mayor. Maybe crime is shooting up in Chicago because Chicago, as a sanctuary city, is not enforcing federal law. How did Lori Lightfoot respond to this? She called him a racist.

MAYOR LORI LIGHTFOOT (D), CHICAGO, ILLINOIS: Being an immigrant or refugee is not a crime.

Alderman Napolitano and Alderman Ray Lopez, I just have to say, shame on you.

Fear to debate, which is at the heart of our democracy, is not the same as using racist tropes and xenophobic rhetoric to promote yourself on the backs of others and demonize them.

CARLSON: Calling for an elected official to follow Federal law is now a racist trope, according to Lori Lightfoot, again, whose city is falling apart.