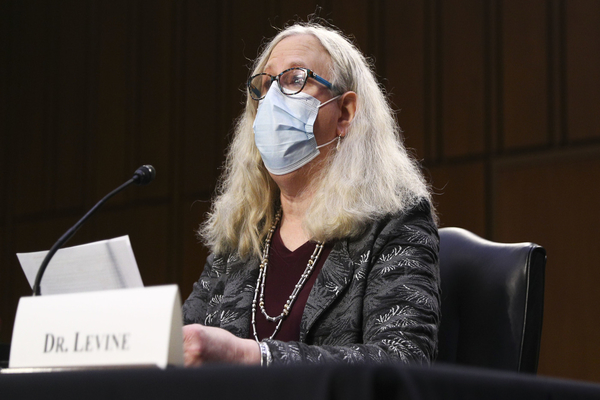 Last week in an interview with NPR, Levine said bills banning young people from accessing drugs, such as puberty blockers and cross-sex hormones, and transgender surgeries, such as elective double mastectomies, as well as bans against males competing in women’s sports are all “really challenging to see.”

Levine, born Richard Levine, said these transgender issues are not political but very appropriate to address by one of the nation’s top health officials.

“I don’t see it as a political issue at all,” Levine said. “I view this as a health equity issue. This is about fairness and equality and about specifically health equity, which is part of my portfolio. So, I don’t see any risk in terms of politicization of this issue.”

In 2017, Levine delivered an address titled “It’s a Transgeneration: Issues in Transgender Medicine” to an audience at Franklin & Marshall College.

Those in the transgender medical industry who are seeing gender dysphoric teens from the “street,” living in homeless shelters, should not go through the usual procedure of first administering puberty blockers to stop normal puberty, but instead immediately prescribe cross-sex hormones, said the former secretary of the Pennsylvania Department of Health.

Levine told listeners that homeless teens who say they are transgender have been “essentially thrown out by their parents because of their gender identity and expression,” and added that “street youth” not living with their parents should not receive puberty blockers but instead “accelerate” with cross-sex hormones “so that the young people feel validated and are getting care consistent with their path.”

Levine told NPR that appearances by a top transgender health official would help to educate Americans about the importance of transgender Americans accessing the drugs and surgeries viewed as necessary for “health equity.”

“I like to quote that sage Yoda from Star Wars,” Levine said. “You know, ‘Fear is the path that leads to the dark side. Fear leads to anger. Anger leads to hate. Hate leads to suffering.’ I think that people fear what they don’t understand.”