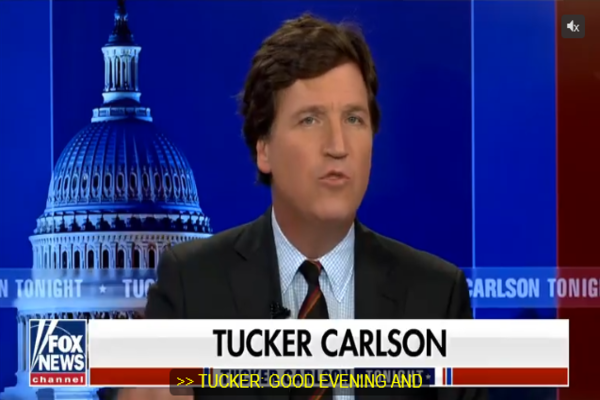 (breitbart) – Tuesday, FNC host Tucker Carlson opened his program with a scathing rebuke of Canadian Prime Minister Justin Trudeau for the second night in a row.

According to Carlson, Trudeau was leading Canada toward tyranny. He warned there were some, including the media, cheering on Trudeau and hoping the United States would adopt similar measures.

CARLSON: A lot happening in the news. Here is one item that we noticed.

Canada canceled democracy last night, and the remarkable thing is, no one in this country seemed to notice that it happened. There was no outcry from our political class, as their friend Justin Trudeau declared Martial Law in response to an entirely peaceful protest from his country’s working class.

Our news media barely noted that it happened, weirdest of all, the State Department which exists these days to denounce such attackers of democracy as Hungary and Poland didn’t say a single word as democracy in Canada ended. That’s pretty weird if you think about it.

Canada is not some exotic faraway land with an alien culture and unintelligible language. It’s not Ukraine. Canada is our neighbor, it is our trading partner. Canada is our closest ally on Earth, it is particularly part of our country.

Our Vice President grew up in Canada, so did half of our comedians and actors and singers. Our border with Canada is the longest border in the world. It stretches more than 5,500 miles.

So on every level, we are deeply intertwined with Canada whether we notice it or not. What happens there matters here. If nothing else, it’s a preview of what will likely happen in the United States.

Justin Trudeau is the dictator of Canada.

If you think that’s an overstatement, try to think of another way to describe what Justin Trudeau is now doing.

For the first time in Canada’s history, Trudeau has invoked what is known as the Emergencies Act, though the protests he is facing hardly qualify as an emergency. But suddenly, Justin Trudeau has the power to crush all political opposition to his rule and that is exactly what he is doing.

Trudeau has ended free speech in Canada. He has banned free assembly.

Trudeau’s government has shut down political rallies and arrested his political critics without probable cause. Trudeau has instituted internal passports that restrict travel within Canada to the politically obedient. Canadians are no longer allowed to leave their own country unless they obey Justin Trudeau, and if they don’t obey, they could be bankrupted and destroyed. He now has the power to do that.

Trudeau has claimed the power to freeze the financial assets of any Canadian who resists him. No Court order is required to do this, he just decides. Justin Trudeau can even dictate what you do for a living and how you do it.

Today, Trudeau threatened to arrest tow truck drivers who refused to tow the trucks of protesters.

Is this really about stopping the spread of coronavirus? No one in Canada is even pretending that it is anymore. Trudeau himself didn’t mention the risk of COVID a single time yesterday. He is not worried about unvaccinated truckers spreading a virus. Trudeau is worried about Canadians resisting his rule, that’s why Trudeau’s government announced yesterday they plan to regulate cryptocurrency forever. Watch.

CHRYSTIA FREELAND, CANADIAN DEPUTY PRIME MINISTER: We are broadening the scope of Canada’s anti-money laundering and terrorist financing rules so that they cover crowdfunding platforms and the payment service providers they use.

These changes cover all forms of transactions including digital assets, such as cryptocurrencies.

The illegal blockades have highlighted the fact that crowdfunding platforms and some of the payment service providers they use are not fully captured under the proceeds of Crime and Terrorist Financing Act.

CARLSON: Oh, the Terrorist Financing Act, so that was a law passed to defeat al-Qaeda; now, it’s being used to stop law-abiding Canadians, middle-class people, students, truck drivers from protecting their earnings from the total mismanagement of Canada’s Central Bank.

Justin Trudeau has wrecked the Canadian economy, but thanks to the Terrorist Financing Act, there is no escape from the consequences. Canadians are going to have to live with the consequences of Justin Trudeau’s fiscal recklessness whether they want to or not, otherwise, they’re terrorists.

JOE SCARBOROUGH, MSNBC HOST: I do have to ask one question, though, about the liberal Prime Minister in Canada. Seriously? Well, I’m sorry. I’m sorry, if I’m a Mayor, I’m a Prime Minister, your trucks get in my city street, they are not going to stay there a week.

CARLSON: Settle down, tough guy. “There’s going to be someone there with a stick.” It’s interesting. It’s always the very same people who call for violence, it’s almost like it excites them. It’s not a good sign.
So clearly, there is an appetite for Canadian-style tyranny in this country. So, the question is: How long until we get it? Let’s see.

This morning, we learned that American Intelligence Agencies are trying to censor a financial website called ZeroHedge. Unnamed sources from Joe Biden’s Intel Community told the Associated Press off the record, of course, that ZeroHedge was, quote, “spreading Russian propaganda” by which they meant criticizing Joe Biden, we can’t have that.
So how long before they pull ZeroHedge off the internet? How long before they tried the same thing with Joe Biden’s many other critics in the media, all of whom we can tell you firsthand, have also been accused of working for Vladimir Putin?
And when that does happen, when these voices are silenced, what will we call it, then? CNN will of course describe it as a necessary National Security measure. But it’s not that, it’s tyranny.

And by the way, since when does the CIA get to decide what websites Americans read? Are there any civil libertarians left in this country? Old-fashioned liberals, anyone? What do they think of this? Maybe they don’t notice it.
In their defense, it’s hard to notice sometimes with leaders like Joe Biden and Justin Trudeau. They don’t look very threatening. They’re not the Hollywood version of fascist. Look at Justin Trudeau. He’s absurd.

The 70s haircut, all those little outfits when he feels like playing dress-up. He doesn’t look dangerous. He looks ridiculous. But maybe Justin Trudeau is smarter than he looks. Leaders like Biden and Trudeau avoid the usual tells, they don’t use armies to invade other countries, for example. Instead, they promote color revolutions and control foreign governments from afar.
That’s exactly what they did in Ukraine, which became a far more repressive place once Joe Biden began running it, and he does run Ukraine, make no mistake. That’s what they do.

This new class of dictators seizes power incrementally through the bureaucracy. They never raise their voices, they don’t wave their arms, they smile, and they tell you, they’re protecting democracy and public health.

They praise diversity, even as they demand conformity. They’re entirely passive-aggressive, but they’re no less dangerous. One morning you wake up and they’ve canceled your job and seized your bank account for the crime of disagreeing with them.

This is the architecture of tyranny, and it’s not just happening in Canada, it is happening here in the United States and will be used against us. Bet on it.