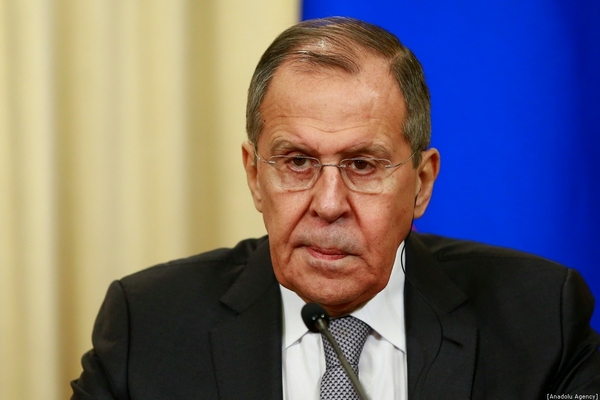 “Russian Foreign Minister Sergei Lavrov on Thursday warned that anti-white racism might be building in the United States.   Political correctness ” taken to the extreme” would have lamentable consequences,” AFP reports.

In an interview with political scientists broadcast on national television, Moscow’s top diplomat said Russia had long supported a worldwide trend that “everyone wants to get rid of racism.”

“We were pioneers of the movement promoting equal rights of people of any skin color,” he said.

But Lavrov stressed it was important “not to switch to the other extreme which we saw during the ‘BLM’ (Black Lives Matter) events and the aggression against white people, white U.S. citizens.”

Founded in the United States in 2013, Black Lives Matter is a movement which became a rallying cry after the killing by U.S. police of an unarmed black man, George Floyd, last May.

The movement has led to a major debate about race, rights of people of color, and the toppling of statues of figures linked to slavery or colonization in countries including the United States and the United Kingdom.

Lavrov accused the United States of seeking to spread what he called “a cultural revolution” worldwide.

“They have colossal possibilities for it,” he said in the interview.

“Hollywood is now also changing its rules so that everything reflects the diversity of modern society,” he said, calling that “a form of censorship.”

“I’ve seen Black people play in Shakespeare’s comedies. Only I don’t know when there will be a white Othello,” Lavrov said.

“You see, this is absurd. Political correctness taken to the point of absurdity will not end well.”

“No one has the right to cowardice anymore,” said Blanquer. “There is a fight to be waged against an intellectual matrix coming from American universities and intersectional theses, which want to essentialize communities and identities, at the antipodes of our republican model which, for its part, postulates equality between human beings, independently of their characteristics of origin, sex, religion.”

Blanquer went on to say that such ideologies are a “breeding ground for a fragmentation of our society and a vision of the world which converges with the interests of the Islamists.”

“When I see… journalists who write in a country that is the heir to the Enlightenment and the French Revolution — when I see them legitimizing this violence and saying that the heart of the problem is that France is racist and Islamophobic, then I say the founding principles have been lost,” he said last November.

Just two weeks ago, Damon Young, New York Times contributor, wrote a column for The Root.  It stated that “whiteness is a pandemic” and “the only way to stop it is to locate it, isolate it, extract it, and kill it.”

“White supremacy is a virus that, like other viruses, will not die until there are no bodies left for it to infect,” Young wrote. “Which means the only way to stop it is to locate it, isolate it, extract it, and kill it.”

The Root and The New York Times refused to condemn him; he was not fired from his job; it’s what they pay him for.