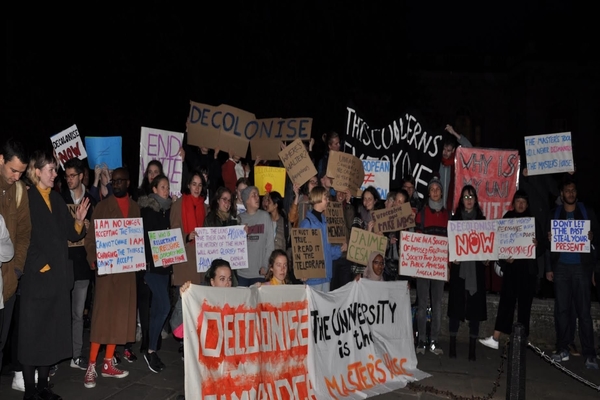 Sir Isaac Newton, the grandfather of modern physics, targeted by the woke mob pushing to “decolonise the curriculum.”

Students at the university in the north of England will reportedly have lessons on Netwon’s groundbreaking three laws of motion, including the law of gravity, with explainers detailing the “global origins and historical context” of his theories.

The engineering department professors of Sheffield University are seeking to “challenge long-standing conscious and unconscious biases” among pupils and to confront the supposed “white savior” and “Eurocentric” view of science and mathematics, according to documents seen by The Telegraph.

A diversity consultant in Britain’s top universities decried the efforts to decolonize the curriculum, warning the movement is expanding from the left-wing traditional humanities departments in the hard sciences.

“I’m employed by universities to do this training, but for me, equality, diversity, and inclusion training is equality of opportunity, diversity of thought, and inclusivity of action – that’s all,” the unnamed consultant said.

“This is something different altogether. It is blatantly teaching people to be activists,” the consultant added.

A leaked copy of the university’s “draft inclusive curriculum development” strategy developed by the Russell Group research university claims that “much important engineering content and curriculum resources is based on maths developed in the 18/19th century”.

Saying that scientists such as Gottfried Wilhelm Leibniz, Paul Dirac, Pierre-Simon Laplace, and Newton could all “be considered as benefiting from colonial-era activity.”

No explanation is given in the document explaining how Newton benefitted from colonialism. On the contrary, it is known that he lost some £20,000 in investments in a failed slave trade company.

“Whether Newton’s foolish investment in South Sea shares in 1720 means that he participated in the slave trade is arguable, said science writer and Isaac Newton biographer James Gleick.

“I doubt he thought about it. I would say that all England benefited from colonialism. The correct response to that is to teach it.”

Free Speech Union secretary, Toby Young, added “Newton famously said, ‘If I have seen further it is by standing on the shoulders of giants.’ Everyone studying maths or engineering deserves to stand on Newton’s shoulders so they, too, can see further, regardless of their ethnicity.”

Other British scientists have attracted the woke mob, with samples collected by English naturist Charles Darwin being swept up in a review of potentially “offensive” exhibits at the UK’s Natural History Museum in September.

With the resurgence of the Black Lives Matter movement in the UK following the death of George Floyd in the American city of Minneapolis last year, universities seized upon the moment to push their anti-British Empire agenda.

The University of Leicester scrapped studies in Medieval English, including Chaucer’s The Canterbury Tales and the Anglo-Saxon epic poem Beowolf, in favor of courses centering around diversity, race, and sexuality.

Michelle Donela, the government’s university minister, warned the push by the left on campus is similar to Soviet Union’s efforts to “whitewash” history.

“The so-called decolonisation of the curriculum is, in effect, censoring history,” she said, adding: “It otherwise becomes fiction, if you start editing it, taking bits out that we view as stains.”