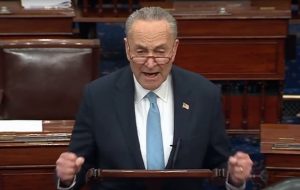 Ginsburg battled cancer over the years and ultimately died due to complications of metastatic pancreas cancer.

“The American people should have a voice in the selection of their next Supreme Court Justice. Therefore, this vacancy should not be filled until we have a new president,” Schumer said.

The only thing Schumer cares about is control.

“Oh, we’d fill it,” McConnell said last year when asked if he would fill a SCOTUS vacancy during an election year.

If President Trump replaces Ginsburg, this would be a huge shift for the highest court of the land because Trump would be replacing liberal Ginsburg with a conservative.