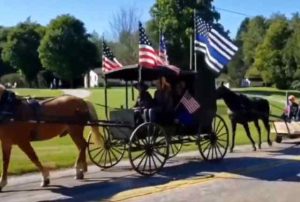 The Amish held a Pro-Trump Patriots Parade for President Trump in Fredericksburg, Ohio on Saturday.

Flashback: Media Completely Ignored Thousands Of Cubans Rallying For Trump In Florida At Mother Of All Caravans

A massive caravan of Cuban-Americans rallied in support of President Donald Trump in the Sunshine State on Sunday shouting through megaphones to let the world know about their support for the president.

Over 4,000 cars and trucks ascended on Florida’s Doral Central Park, flying Trump 2020 flags and blaring their horns while people hung out of their sunroofs and windows waving Trump flags. Their car windows were painted with slogans like “No Communism,” “Vote for Trump” and “Free Cuba.”

Yet, in this era of fake news, as to be expected, the mainstream media completely ignored the monumental turn out of Hispanic Trump support in Florida, the coveted battleground state and home to the majority of refugees from Cuba.

The media is strategically coordinating to downplay the immense support Trump has amassed among Cuban Americans and Hispanics, particularly in Florida, Ariel Martinez, the organizer of Cubans for Trump and Sunday’s Mother of all Caravans warned in an interview with The Gateway Pundit.

Dozens of media local and national outlets were sent a press release weeks ahead of the pro-Trump caravan, but just one outlet accurately covered the event, Martinez explained.

“It’s funny because they were all sent the press release. Just one local newspaper, the Miami Herald came and reported it accurately, which for me was a shock. They reported the number of cars and everything pretty much exactly the way it was,” he said. “But the other news stations basically didn’t cover it. Three local outlets, that stood outside the park, portrayed two to three cars coming out and mentioned the event for just about 30 seconds.

“There were 4,000 plus vehicles and each vehicle had somewhere between two to five people. So do that math – roughly 10,000 people came to support our president – it was just massive. Honestly, was a lot more than I ever anticipated.”

Ironically, in July, when the group Cubans for Biden held a caravan to protest the Trump administration, the media gave wall to wall coverage of the even, despite there being a mere 12 cars at the caravan in support of the presumptive Democrat nominee.

“But for Biden’s caravan, which literally had between 12 to 13 cars, the media – all the news stations—aired comprehensive reports on the entire event, featuring interviews with all of the attendees and it looked like, you know, “it’s absolutely amazing,” Martinez continued. “The media bias ties back to why I started Cubans For Trump in the first place.

“The turnout for either event speaks absolute volumes. The fact is, Cubans are very clearly versed on what the beginnings of socialism and Marxism look like when they start to infiltrate a country despite how cute and cuddly the media tries to present it to be. We see creepy uncle Joe as a puppet for the very extreme left, who sees nothing wrong with embracing the vicious murderers running communist horror shows and he represents an extreme threat to the freedoms of this country.”

A majority of minorities are Democrats because of the lies inundated on the American public by the media, Martinez’s wife, Maria, a Mexican American and former Democrat told The Gateway Pundit.

“We have an issue with the Hispanic media. A lot of Hispanics think the way I used to. They believe the president is a racist because the media, the big networks – Univision and Telemundo – they say absolutely nothing positive of President Trump, manipulate information and twist everything he says,” she said. “I’d like to thank the Gateway Pundit because we just want America and the world to know Hispanics support Trump, especially in Florida.