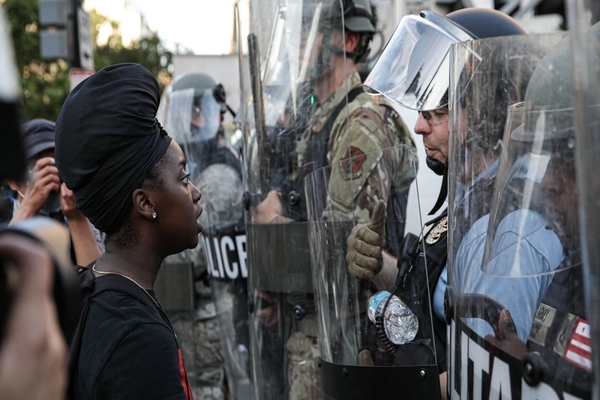 Mollie Hemingway, Fox News contributor and senior editor at the Federalist, told Breitbart News the deception from the news media contributed to billions of dollars in property damage and dozens of deaths in the violent riots throughout 2020.

Hemingway, author of the forthcoming book, Rigged: How the Media, Big Tech, and the Democrats Seized Our Elections, discussed the news media’s role in antagonizing left-wing political violence throughout the country leading up to the presidential elections of 2020, with Breitbart News Daily special guest Joel Pollak on Sirius XM.

Hemingway recalled Democrats and many news media outlets lying about violent protests in May 2020 in Lafayette Square, a public park in Washington D.C., just north of the White House.  Regularly repeated lies included false descriptions of demonstrators as “peaceful” and false claims of demonstrators being tear-gassed by authorities to enable former President Donald Trump to have a photo-op holding a bible at St. John’s Episcopal Church, previously vandalized by arsonists.

Hemingway stated, “The initial story that peaceful protesters were tear-gassed by Donald Trump for a photo-op was clearly not true. If you saw the photos of the park police clearing Lafayette Square, they weren’t wearing the gas masks that you would normally see if there had actually been a deployment of tear gas.  I wrote that up, and it got a lot of attention.”

The left-wing news media outlets combined pepper spray, smoke canisters, and tear gas and refused to correct the false claim of the use of tear gas.

“The inspector general of the U.S Department of the Interior released a report Wednesday exonerating President Donald Trump from false claims that he used tear gas to clear “peaceful protesters” from Lafayette Square for a Bible photo-op,” reported Breitbart News on Wednesday.

Hemingway remarked, “This report came out this week, showing that nothing that had been said was accurate, but I got an incredible amount of pushback from people. But it was all three of those things, including that I thought one of the interesting things were reported that showed that there were nearly 50 park police who were injured, including one who required surgery from the riots that were happening at Lafayette Square. The night before, a fire had been set in historic St. John’s church, and they had to be D.C. police actually cleared the park at that time so they could get fired trucks into the church.”

CNN, the New York Times, and the Washington Post – as well as many other left-wing outlets – made false claims that tear gas was used against “peaceful protesters.”

“This was not a peaceful environment at all,” Hemingway noted, “and the media reaction that said you couldn’t do anything as people were besieging the White House — causing the president to be put in a bunker for his safety — or churches were being burned, or these park police were being injured, actually contributed so much to the entire summer of violence, because people were terrified of doing anything to restore order.”

She continued, “If you couldn’t do it even at the White House, [you] certainly couldn’t do it to just protect people’s businesses in a random city, and so the dozens of people that were killed, the billions of dollars in damage, I think, were really related to the media hysteria over this moment when the park — Lafayette Park — was cleared because things had gotten out of control in that area.”

Hemingway challenged the “insurrection” narrative pushed by leftist news media outlets and Democrats regarding the events of January 6 at the Capitol.

“There is definitely an argument that the planned and coordinated events that the White House and throughout the country more matched the idea of what an insurrection is than a one-off at the Capitol — however awful all of those things are — and I think there was this effort to try to get a mood going of ousting the president, but probably more directed toward the election.”