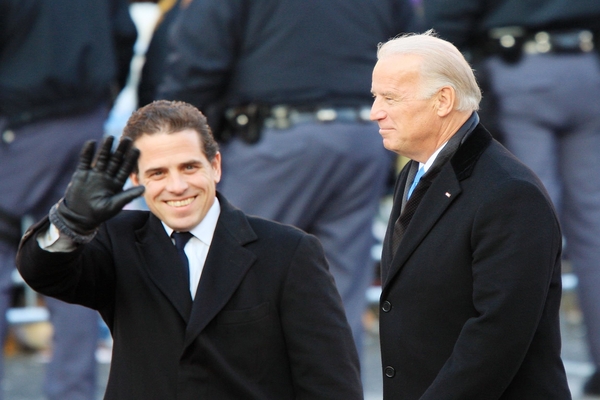 The Soho art dealer Georges Bergès is working with Hunter Biden, an exhibit is expected in New York this fall, and Hunter’s paintings are estimated to sell from $75,000 to $500,000.  The lack of transparency has triggered concerns for the Biden family, as they have been accused of using the family name for profit and engaging in pay-for-play schemes for years.

The Biden White House is working to avoid the mounting ethical questions with an arrangement that would make all buyers of Hunter’s art anonymous – Hunter would not even know who purchased his art.  According to the Washington Post, the plan will have Bergès determining the artwork’s price points and withholding “all records, including potential bidders and final buyers.”

“The owner, Georges Bergès, has also agreed to reject any offer that he deems suspicious or that comes in over the asking price, according to people familiar with the agreement,” the Post reported.

“The only way to address these issues is with greater transparency–not less,” he continued. “Their proposed solution is greater secrecy,  not transparency. And they are essentially saying ‘Trust Us.’ Joe and Hunter Biden’s track record on such matters gives us no reason to trust them.”

Former ethics officials from President George W. Bush and Barack Obama have voicing concern that the arrangement is a bad idea.

“The whole thing is a really bad idea,” Richard Painter, chief ethics lawyer to Bush, said. “The initial reaction a lot of people are going to have is that he’s capitalizing on being the son of a president and wants people to give him a lot of money. I mean, those are awfully high prices.”

The Post noted, “some experts argued that the best protection against influence-seeking would be transparency, not secrecy.”

The art venture has a “shameful and griffty feeling to it,” the White House’s plan is insufficient, reported Walter Shaub, who served under former President Obama as the Office of Government Ethics director.

New York gallery owner marc Straus questioned the price points set for Hunter’s work, stating “nobody would ever start at these prices” for a novice, such as Hunter.

“There has to be a résumé that reasonably supports when you get that high,” Straus said. “To me, it’s pure ‘how good is it and what’s this artist’s potential, what’s the résumé?’ On that basis, it would be an entirely different price. But you give it a name like Hunter Biden; maybe they’ll get the price.” “My take was [the paintings] weren’t bad at all,” he added, according to the Post. “But there’s a yawning gap between not bad and something fabulous.”

Nonetheless, Biden’s White House is confident in this suspected arrangement.

“The president has established the highest ethical standards of any administration in American history, and his family’s commitment to rigorous processes like this is a prime example,” deputy White House press secretary Anthony Bates said.

Bergès has not directly commented on his ties to China; a woman speaking on his behalf to the Post dismissed it as “nothing unusual.”

The art dealer’s website does not mention any connection between Hunter and the president; he is described as a “lawyer by trade who now devotes his life to the creative arts.”

The concerns about pay-for-play lingers.

“Anybody who buys it would be guaranteed instant profit,” Alex Acevedo, owner of the Alexander Gallery in Midtown Manhattan, told the New York Post. “He’s the president’s son. Everybody would want a piece of that. The provenance is impeccable.”

Last month Schaub told Fox News that Bergès “should disclose the identity of the purchasers” to alleviate concerns of buyers attempting to “gain access to [the] government.

One of the most well-known examples of this centers around Hunter’s involvement on the board of Burisma, a Ukrainian oligarch-owned oil and gas company, which paid him tens of thousands of dollars per month despite his lack of experience in the energy sector or Ukraine in general. At the time, Hunter’s then-vice president father was the point-person negotiating U.S. policy with Ukraine. After leaving office, Joe Biden later bragged about how he threatened to withhold U.S. assistance to Ukraine unless Ukrainian officials fired a prosecutor who had launched a corruption investigation into the company that had hired Hunter.

Hunter also came under criticism for his lucrative business dealings with state-owned entities in China, as Breitbart News and Secret Empires author Peter Schweizer has reported in detail.

“In China, [Hunter] travels with his father in December [2013] aboard Air Force Two. While his father is meeting with Chinese officials, Hunter Biden is doing; we don’t know what. But the evidence becomes clear because ten days after they return to Washington, his small boutique investment firm, Rosemont Seneca, gets a $1 billion deal,” the Government Accountability Institute (GAI) president explained during a 2019 appearance with Sean Hannity.

Hunter Biden is also being investigated by the Federal Attorney’s Office in Delaware for his taxes. He said he was confident that any cheating would be removed.

Money laundering has been identified as an issue in the art world, as the Senate’s Permanent Subcommittee on Investigations detailed in a report last year.

“Secrecy, anonymity, and a lack of regulation create an environment ripe for laundering money and evading sanctions,” the committee determined.

“Given the intrinsic secrecy of the art industry, it is clear that change is needed in this multi-billion dollar industry,” it added.

In June, Hunter explained painting as “much more about kind of trying to bring forth what is, I think, the universal truth,” as he spoke with Artnet.

“My dad loves everything that I do, and so I’ll leave it at that,” Hunter said when asked what his father thought about his art.