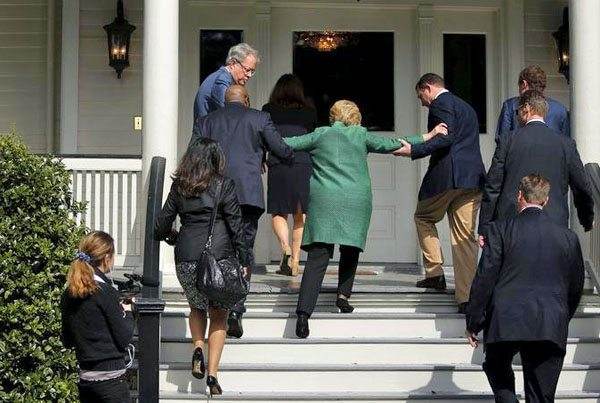 (thegatewaypundit) – Based on new testimony uncovered today, Hillary Clinton was carted all over in a wheelchair during her 2016 Presidential campaign.  She couldn’t walk a city block and she had a “med bag” near her at all times.

We wrote on August 15, 2016 that Hillary was so exhausted that she was taking weekends off.   This article caught fire and was the top story at Drudge that day.

We then reported on an individual who was always near Hillary who was quickly referred to as her handler.  This individual on the left in the picture above, was found carrying a diazepam pen, used to control seizures.  Once he was identified at The Gateway Pundit and other sites he suddenly disappeared for a time.

TRENDING: HILLARY HEALTH EXCLUSIVE: Witness Reveals in 2016 Presidential Campaign Hillary Used a Wheelchair, Couldn’t Walk a Block and Had a “Med Bag” with Her at All Times

Hillary’s health was so bad that she had to be lifted into her vehicle, which we called the Scooby van, after leaving the 9-11 ceremony in New York.  She appeared to drop and then was chucked into the Scooby van like a slab of meat.

But the media covered for Hillary.  They discounted any mention of incidents or allegations concerning her poor health.  They even went so far as to feature her in the October 2020 issue of Women’s Health magazine.  The mainstream media was ignoring Hillary’s horrible health and accusing us who were reporting on it as pushing ‘fake news’.

In 2016 Ann worked at the hotel where Hillary was stationed before the 2016 Presidential debate in St. Louis.  Ann shared her first-hand account related to Hillary Clinton and in particular her health that until today has never been reported.  Below are segments from her interview where she discusses her first-hand accounts.

I was the supervisor assigned to the hotel she [Hillary] was staying at… Everything was enclosed.  Walkways within the hotel were enclosed with tarps.  And that Scooby van that everybody calls, we were talking about it and there were secret service agents there and they were talking like, ‘Oh yeah, they have it specially made for her.  It’s curb height because she can’t step up or down.  They want it right at the curb so she can walk right in to it.’

[During a walkthrough a week or so before the event with the Secret Service, Police and hotel staff]  We were walking around and where she was going to practice her debate was at the other end of the hotel in a conference room… It’s like a whole block away…The Secret Service agents looked at us and said, ‘she can’t do this… She can’t walk and they’re arguing with each other, she can’t walk.’ [They said we’ll have to get a wheelchair but then said they couldn’t do that because people would see her in it.]

The day that she arrived, we’re at the hotel waiting.  Everybody knows there’s always a motorcade with Secret Service involved. Highways get shut down for everybody.  All the sudden the motorcade stops .  Nobody knows why.  I’m in the communications center and there’s some bickering on the radio because you can hear Secret Service talking and they’re bickering back and forth.  I’m not thinking much about it.  So they get there.  And of course, when they get there the hotel shuts down completely… Wherever you are you’re locked down completely and you can’t leave because Hillary doesn’t want to see you…Nobody is supposed to see her.  She doesn’t want to look at anybody.

[In the Comms Center where Ann was at, two Secret Service guys were arguing] ‘Why wasn’t the medical bag in the van.  Why was it in car number whatever?’