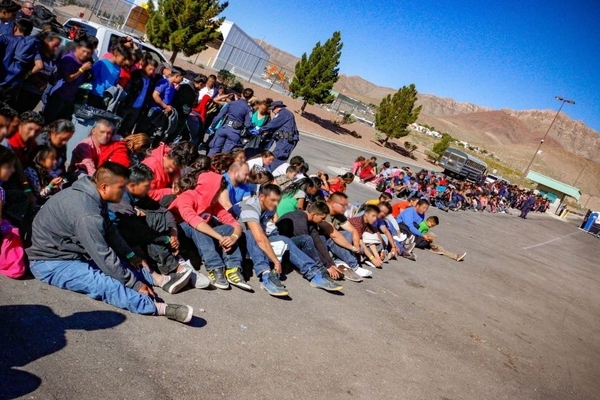 In the brief Shahoulian writes:

As explained in more detail below, the United States is currently encountering record numbers of noncitizens, including families, at the border. These encounter rates have strained DHS operations and caused border facilities to be filled beyond their normal operating capacity, impacting the ability to employ social distancing in these congregate settings. At the same time, DHS is also experiencing significantly increased rates of noncitizens testing positive for COVID19. In light of these and other considerations, enjoining the application of the CDC Order to families would exacerbate overcrowding at DHS facilities and create significant public health risks. [Emphasis added]
…

This risk has recently increased due to the recent spread of the highly transmissible COVID-19 Delta variant. The rates at which encountered noncitizens are testing positive for COVID-19 have increased significantly in recent weeks. And although the rate of infection among CBP officers had been declining, this rate recently began increasing again, even though the percentage of officers and agents who have been fully vaccinated has grown significantly since January. This has led to increasing numbers of CBP personnel being isolated and hospitalized. [Emphasis added]

In the brief, Shahoulian also admitted that as of August 1, the U.S. Border Patrol was over capacity by nearly 400 percent. Specifically, nearly 18,000 border crossers were in Border Patrol custody dispute the coronavirus-adjusted capacity limit of 4,700.

These capacity figures are extremely worrisome, particularly because of the continued spread of the highly transmissible Delta variant. Overcrowding challenges DHS’s ability to effectively execute many of its core public health mitigation and countermeasure activities. Additionally, higher rates of COVID-19 transmission within a DHS facility could quickly impede the Department’s ability to utilize that facility’s maximum capacity, further lowering the overall processing and holding capacity along the southwest border. Indeed, the Department’s operations have already been impacted by significantly increased positivity rates among individuals in its facilities, including families. [Emphasis added]

A White House source told the Washington Post that Biden is weighing a plan to give border crossers the Johnson & Johnson vaccine before their release into the U.S. interior.

According to the latest data, the Biden administration has released roughly 173,000 border-crossers into the interior of the U.S since he took office. Additionally, the month of July had nearly 15,000 Unaccompanied Alien Children (UAC’s) released across the U.S. sponsors. Another 16,000 UAC’s remain waits in federal custody until released to sponsors.