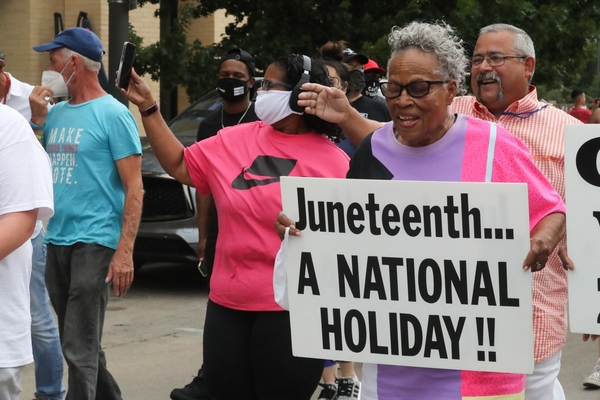 President Biden signed Juneteenth into law as a new federal holiday.  Biden said Americans “must” and “ought to” observe it- as he has spent the last 50 years if before doing anything about it.

The federal government will observe Juneteenth on Friday, June 18, as June 19 falls on a Saturday this year.  The U.S. government received short notice of the shutdown.

Juneteenth is also known as “Freedom Day” or “Emancipation Day,” which celebrates the day in which union soldiers informed black Americans in Galveston, Texas, that they have been freed by the Emancipation Proclamation two-and-a-half years before.

It is a celebration of Republican victory over Democratic racist, in a sense.

The holiday has become an expression of African American heritage and pride.

Memorial Day is a holiday celebrating the end of the Civil War, initially known as Decoration Day, and it began as an informal holiday.  Memorial day is not specific to one group of people or one side of the war.

Juneteenth took more than a century to become a federal holiday.  It is not a divisive holiday, as it celebrates the assimilation of black Americans into full American citizenship.  The true potential would be realized a century later over the opposition of racist Democrats.

The Black Lives Matter movement helped turn Juneteenth into a cause for the left to celebrate. However, few Republicans opposed it; many had participated in Juneteenth celebrations.

Juneteenth is about freedom from physical slavery, while Critical Race Theory imposes new, mental slavery on America, forcing us to look through a crude racial lens.

Critical Race Theory teaches that America is guilty of “systemic racism”; Juneteenth asserts that America stands for freedom when it is true to its core principles.

Juneteenth presents black patriots and conservatives to be honored, to uphold the vision of abolitionists describing America’s core values not as “racist” but as “saving principals.”

In President Trump’s “Platinum Plan,” he called for Juneteenth to become a federal holiday.