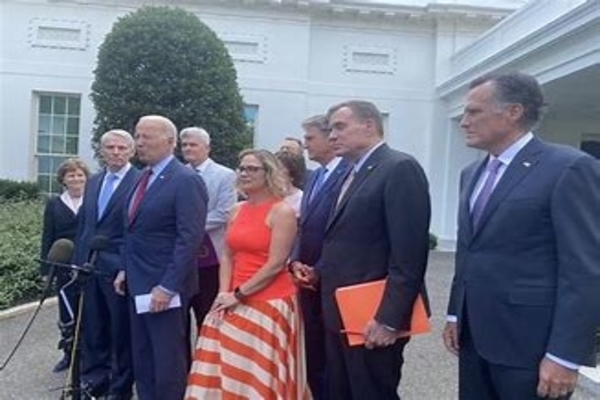 Senate Republicans now walk away from President Biden’s infrastructure deal over its expense as a separate reconciliation tactic full of far-left items.

“GOP senators are also concerned that they may get tied to the larger reconciliation package if they give Democratic moderates political cover by joining with them to pass the bipartisan infrastructure proposal,” The Hill reported.

Thursday Senate Minority Leader Mitch McConnell said Biden’s strategy of passing a bipartisan deal tied to a  reconciliation package, which is filibuster immune, puts Senators, “who were optimistic about doing a bipartisan infrastructure bill, in the position of our Democratic friends having to guarantee that the 2017 tax bill is unwound.”

The Hill reports there is another reason, “Several GOP senators are questioning a provision that would provide $40 billion to beef up IRS enforcement, which is expected to generate an estimated $100 billion in new revenue that can be spent on infrastructure.”

A Republican Senator told the Hill, “There were points of inquiry. There are a few areas where, if we’re saying we’re going to pay for this, we want to make sure we’re really paying for it.”

“There were some good questions about whether this or that pay-for is an area where we’re being too ambitious,” he reasoned.

Concerns were also expressed by Sen. Rand Paul (R-KY) over the bill’s expense and how to pay for it, which could be generated by shifting resources home from Afghanistan.

“The question is how we pay for it. I’ve been asking, where’s the $50 billion we save a year in Afghanistan? Where’s the savings?” he explained. “That’s how I’d pay for something like this. I’d quit spending it in Afghanistan and spend it here. If we had a pay-for like that, it would go further to convincing me.”

Biden did acknowledge Thursday that he may not have the votes to pass the bipartisan measure during a press conference, as radical Democrats have already suggested the opposition due to the exclusion of far-left items.

Alexandria Ocasio-Cortez (D-NY) said Thursday she opposes the bipartisan deal which would need House approval after being passed in the Senate:

Sen. Alex Padilla (D-CA) said shortly after the deal was agreed upon that “This bipartisan deal, it’s not enough. It doesn’t meet the moment.”

In another tweet which has since been deleted, Wyden added, “he wants an assurance the bipartisan package tied to any larger reconciliation bill.”

House Speaker Nancy Pelosi (D-CA) backed up Wyden’s assurances Thursday by saying, “there will be no infrastructure bill unless we have a reconciliation bill.”

The plan details $579 billion in total new spending with $312 billion for transportation and $266 billion for other traditional infrastructure items.

The reported items of the deal include: