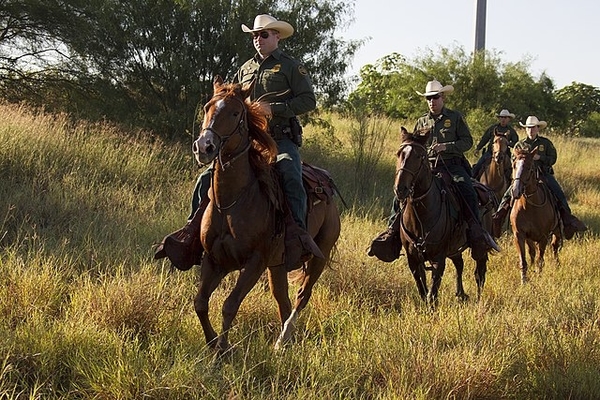 Over the weekend, the Associated Press released a video showing a new angle to the Del Rio Sector Horse Patrol Unit’s experience with Haitian migrants attempting to cross the Rio Grande.

Sarah Blake Morgan, an AP journalist, tweeted a video from the middle of the Rio Grande showing the Border Patrol agents trying to block the group of Haitian migrants from entering the United States.

The video shows the migrants attempt to enter the U.S. after crossing the Rio Grande. The agents used the horses to control and turn the migrants back.

In the video, one of the agents shown in multiple photos where reports claimed the agent whipped or “strapped” the migrant can be seen grabbing the migrant and turning him back towards the river.

In this video, the agent does not appear to strike any of the migrants with reins.

He was swinging [the reins], but I didn’t see him actually whip someone with it,” the photographer stated. He took the infamous photos that have “really been misconstrued” from the Mexican side of the river.

Without any reported evidence of horseback agents striking migrants, the Department of Homeland Security and the Biden White House have ordered the sector to stop using horse teams.

It appears even President Joe Biden is among those who have misconstrued the images. “To see people treated like they did, horses running them over and people getting strapped, it’s outrageous I promise you those people will pay,” Biden said during a press conference on Friday.

Vice President Kamala Harris also misconstrued, offered her conclusions on ABC’s The View. “I was outraged by it … It was horrible and deeply troubling. There’s been now an investigation that is being conducted which I fully support, and there needs be consequences and accountability.”

Migrant rescues have relied on Horse Patrol Unites of the U.S. Border Patrol in remote and hazardous terrains all along the southwest border.