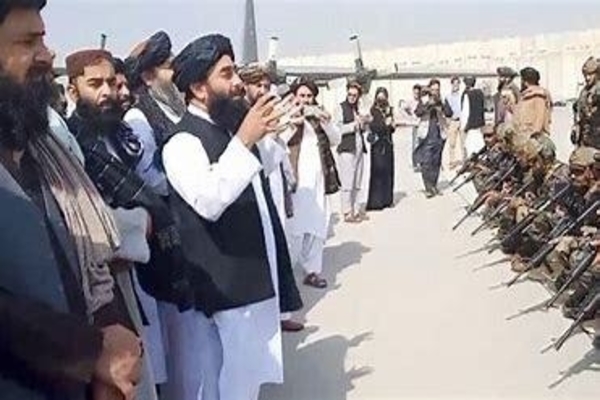 The Taliban in American camouflage uniforms, while donning weapons and other sophisticated military paraphernalia left behind by allied forces, declared control of Afghanistan.

“Afghanistan is finally free,” Hekmatullah Wasiq, a top Taliban official, told the Associated Press on the tarmac. “The military and civilian side (of the airport) are with us and in control. Hopefully, we will be announcing our Cabinet. Everything is peaceful. Everything is safe.”

Wasiq urged the 38 million people of the country to return to work while reiterating the pledge of the Taliban offering a general amnesty. “People have to be patient,” he said. “Slowly, we will get everything back to normal. It will take time.”

“I hope you be very cautious in dealing with the nation,” he said. “Our nation has suffered war and invasion, and the people do not have more tolerance.”

At the end of his remarks, the Badri fighters shouted: “God is the greatest!”

“Our technical team will be checking the technical and logistical needs of the airport,” he said. “If we are able to fix everything on our own, then we won’t need any help. If there is need for technical or logistics help to repair the destruction, then we might ask help from Qatar or Turkey.

Earlier, General Kenneth McKenzie, head of Central Comand, said 73 aircraft were “demilitarised,” or rendered useless, by troops as they finalized the two-week evacuations of Afghanistan.

McKenzie stated the Pentagon built a force of nearly 6,000 troops to occupy and operate Kabul’s Hamid Karzai International Airport; around 70 MRAP armored tactical vehicles were left behind- costing up to $1 million apiece – rendered useless before leaving, and 27 Humvees.

Also rendered useless was the system that helped fend off a five-rocket barrage from the Islamic State group on Monday.