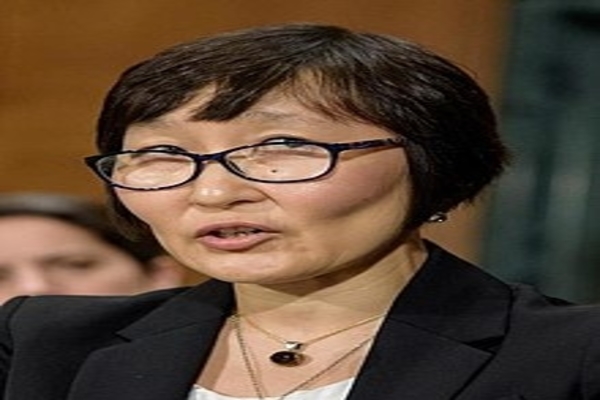 Saule Omarova, Biden’s nominee for the Comptroller of Currency (OCC) Office, called to eliminate all private bank accounts and deposits during a March 2021 conference.

Omarova discussed her paper “The People’s Ledger How to Democratize Money and Finance the Economy,” which would help “redesign” the financial system and make the economy “more equitable for everyone.”

It would change the “private-public power balance” and democratize finance to a more systemic level, Omarva said.

While explaining her paper, she argued the nation’s central bank, the Federal Reserve, can only use “indirect levers” to “induce private banks to increase their lending.”

In her paper, she calls for all banks to be eliminated and all bank accounts should be transferred to “FedAccounts” at the Federal Reserve.

“There will be no more private bank accounts, and all of the deposit accounts will be held directly at the Fed, she said during her conference speech:

Omarova said her proposal would give the Fed more “proactive” monetary policy tools, such as “helicopter money.” She also pondered how the Federal Reserve could “take money” from Americans during an inflationary environment.

If the Senate were to confirm Omarova, she would have the “most powerful, least accountable” position over America’s banking system; a former senior government official told Breitbart News.

The former senior government official said, referring to FedAccounts, “The Democratic Party over the last couple of administrations, they want the government to essentially take over a lot of financial functions from banks.”

Twenty-one state financial officers called on Biden to withdraw Omarova’s nomination for the U.S. comptroller due to her radical views.

The LPE serves as a platform to discuss:

The role of law and legal discourse in the creation and maintenance of capitalism and in mediating tensions between capitalist order and democratic self-rule. Scholars in our network work to understand the relationship between market supremacy and racial, gender, and economic injustice; to articulate the relationship between capitalism and devaluation of social and ecological reproduction; and to explore the distinctive ways that law gives shape to and legitimates neoliberal capitalism, ranging from dynamics of financialization to the relation between the carceral state and capitalism. We also seek to offer concrete legal reforms designed to move beyond neoliberalism and toward a genuinely responsive, egalitarian democracy, with critical attention to the need for power and movement-building as part of any such transformation. [Emphasis added]