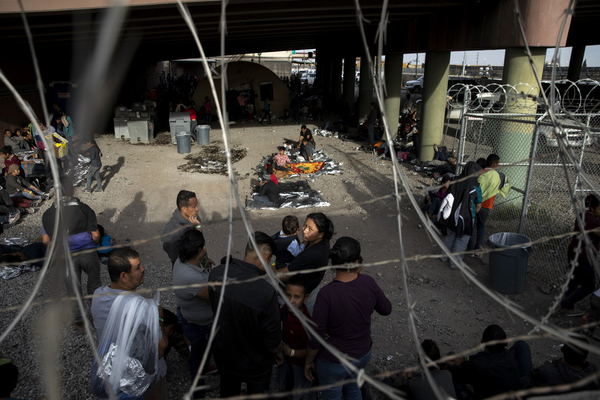 Texas received a request for help from U.S. Customs and Border Protection officials to stem the increasing humanitarian crisis in Del Rio, where 9,000+ migrants are being detained under a bridge. Abbott responded by sending units to “shut down six ports of entry” and “stop the caravans from overrunning our state.”

“The sheer negligence of the Biden Administration to do their job and secure the border is appalling. I have directed the Department of Public Safety and the Texas National Guard to surge personnel and vehicles to shut down six points of entry along the southern border to stop these caravans from overrunning our state,” Governor Abbott said in a written statement. “The border crisis is so dire that the U.S. Customs and Border Protection is requesting our help as their agents are overwhelmed by the chaos. Unlike President Biden, the State of Texas remains committed to securing our border and protecting Americans.”

Thursday morning, CBP officials said, “The Border Patrol is increasing its manpower in the Del Rio Sector and coordinating efforts within DHS and other relevant federal, state and local partners to immediately address the current level of migrant encounters and to facilitate a safe, humane and orderly process,” in response to an inquiry from Breitbart Texas.

CBP officials claim that while detained under the Del Rio International bridge, drinking water, towels, and portable toilets are being delivered for the migrants to use. However, inadequate toilets to serve the more than 9,000 migrants under the bridge are evident in videos and photos.

Officials claim, “To prevent injuries from heat-related illness, the shaded area underneath Del Rio International Bridge is serving as a temporary staging site while migrants wait to be taken into USBP custody.”  But the bridge shadow is exceeded by the capacity of migrants, as shown in videos and photos.

“The vast majority of single adults and many families will continue to be expelled under the CDC’s Title 42 authority, and those who cannot be expelled under Title 42 and do not have a legal basis to remain will be placed in expedited removal proceedings,” the officials also claimed. However, they did not indicate how many of the mostly Haitians migrants fall under these procedures.

CBP officials were asked by Breitbart Texas how many toilet facilities are currently available. A response was not immediately available.