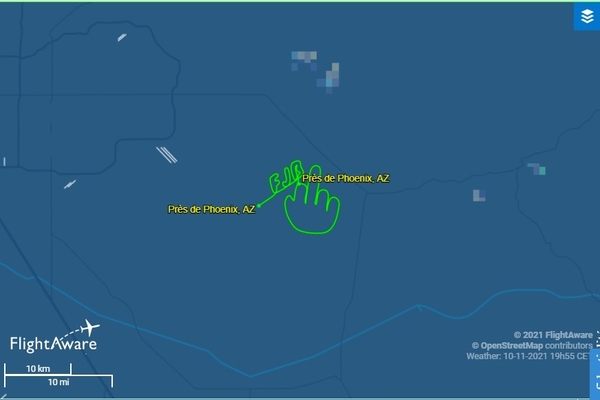 In Arizona, a private pilot left a message in the sky to Joe Biden before landing.

The comedic stunt was posted on Twitter by OAN anchor Stephanie Hamill; she also posted a confirmed flight path from Flight Aware.

Reportedly, the 1968 Cessna 150H was registered to a Phoenix-based company, Avito Research LLC, in the Federal Aviation Administration database.

Previously, in a post appearing to be owned by the pilot, a picture of former President Donald Trump was posted in January of 2020.

The viral phrase “FJB” is an acronym for “F**k Joe Biden,” the increasingly popular term led by America’s disapproval of the Biden administration. However, “Let’s Go Brandon” has become the less vulgar phrase after a NASCAR driver named Bandon was told that the crowd was chanting his name by an NBC reporter. The group was clearly chanting the expletive phrase.

The same outlet has criticized those repeating the less vulgar phrase like the Nazis, Joseph Stalin, and Adolf Hitler.