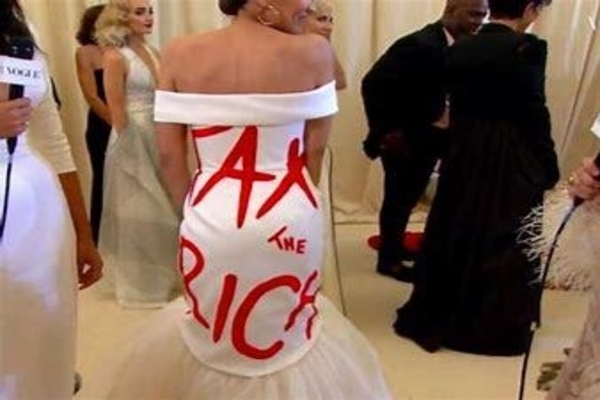 Left-wing Rep. Alexandria Ocasio-Cortez (D-NY) was called out for showing up to a $35,000 per ticket Met Gala donning an ultra-fancy designer dress with “Tax the Rich” embossed on the back.

“‘Tax the Rich’……But first I’m gonna go have the time of my life partying with them all at the most extravagant over the top party of the year that is essentially a celebration of richness,” reacted Barstool Sports’ Dave Portnoy.

“‘Tax the rich’ says AOC’s dress … at the Met Gala … where tickets cost $30,000. But AOC doesn’t mean them; she means you. You’re rich. Because you work. Tax you. That’s the reality. The Met Gala guys get tax breaks. You don’t,” another Twitter user wrote.

“If AOC cared about taxing the rich she would have protested the Met Gala, instead she joined the party,” another tweeted.

“Why didn’t AOC help her Abuela instead of spending 30K+ to go to the Met Gala?” a third asked, referring to in June when Ocasio-Cortez shared photos of her grandmother’s home in Puerto Rico and said Hurricane Maria relief had not arrived because of former President Donald Trump.

Another Twitter user photoshopped the image, instead, it read, “Let them eat cake.”

“AOC started by protesting, moved on to ignoring most protests and is now being photographed at the Met Gala while people are being brutally arrested protesting outside,” another Twitter user wrote.

“Wearing a ‘Tax the Rich’ dress to an event surrounded by some of the richest people in America and largely funded by multi-billion dollar businesses, perhaps isn’t the statement you think it is, @AOC,” another said.

“AOC WEARING A TAX THE RICH DRESS AT AN EVENT FULL OF RICH PEOPLE IS THE FUNNIEST THING EVER,” another tweeted.