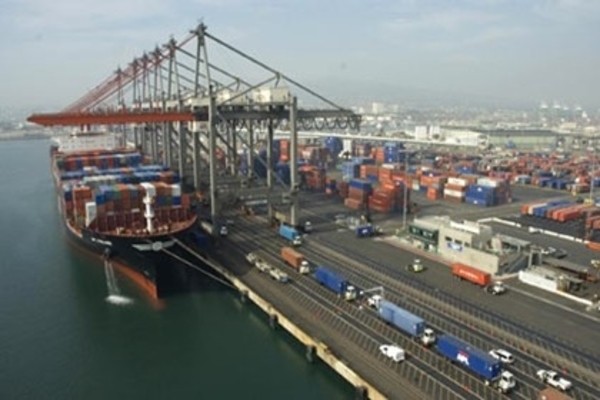 A backlog of shipping containers that have been anchored off the coasts of California and New York will have to wait up to 4 weeks to unload their goods, in yet another crisis for the Biden administration.

“Dozens of cargo ships anchored off the coasts of Los Angeles and New York face shocking wait times of up to four weeks, and railyards and trucking routes are hopelessly clogged due to the lack of manpower to unload goods,” reported the Daily Mail.

Because of the pandemic, consumer demand is skyrocketing, as people are spending less on travel and entertainment and more on toys, clothing, electronics, and a range of other goods. However, American ports cannot unload the shipments in a timely fashion due to a lack of human resources that coincides with the coronavirus restrictions.

“Global infrastructure was not designed to handle goods at such a rate,” one expert on the situation told the Daily Mail. “Supply chains are the artery who feeds our entire ecosystem. The government needs to intervene to stop this crisis immediately, or face increased inflation and unemployment, and economic breakdown – or face an end to global trade.”

Footage obtained by DailyMail.com shows the scale of the problem on the seas with more than a dozen cargo ships and oil tankers anchored outside New York’s harbor, waiting to unload their goods.

Ports in Los Angeles and Long Beach – two of the most popular shipping destinations in the US – are currently housing vessels that have been left anchored for four weeks.

The ports saw as many as 73 vessels waiting to unload earlier in September, and 66 container ships this week, according to Marine Exchange of Southern California data cited by The Wall Street Journal.

Up to 500,000 shipping containers are in limbo off the Southern California coast, while lines of truck drivers wait for hours to transport their scheduled shipments, according to CBS Los Angeles.

“I’ve got friends right now that are in line… from nine o’clock in the morning and they can’t pull the load yet,” truck driver Walter Martinez told CBS. “The people inside, they get paid by the hour, but not the drivers.”

Oscar Ovalle, a truck driver, has confirmed waiting from 8 pm to 3 am with one crane lifting containers for 60 trucks.

“They kicked me out because they leave at three o’clock,” said Ovalle. “There’s one crane for 60 trucks, and it’s ridiculous! They have two other cranes sitting.”

Executive Director of the Port of Los Angeles, Gene Seroka, has called upon the Federal Reserve System to aid in the crisis.

“Over the last ten years, the federal government and Congress have out-invested West Coast ports at a rate 11 to one. That’s got to change, and with an infrastructure bill pending vote in Congress this week, we need all eyes on Los Angeles,” said Seroka. “This is what ten years of under-investment looks like, and we need to move forward.”

“Consumer experts have warned Americans to begin doing their Christmas shopping now, to ensure goods arrive on time, and to ensure there’s time to try and find an alternative if a desired gift is one of the products that is currently scarce,” notes the Daily Mail.