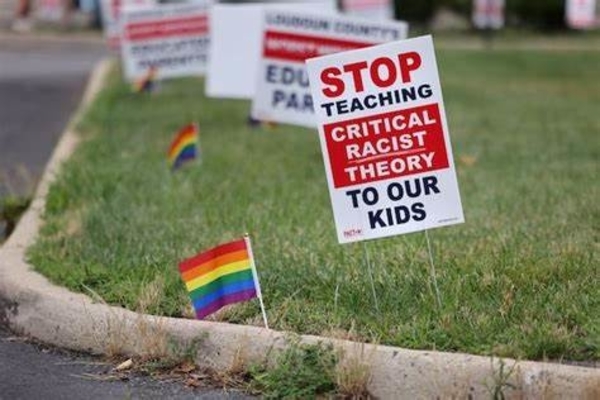 A whistleblower is facing a “culture of intimidation” after exposing the school district’s “radicalized” critical race theory (CRT) curriculum. If it is not stopped, the country will soon be unrecognizable; it is causing “great harm and racial divide and hostility between children.”

In July, the veteran Providence, Rhode Island, English teacher Ramona Bessinger described the school district’s “radicalized curriculum” as actually creating “racial tensions among students and staff where none existed before.”

This past week the teacher joined Steve Malzberg on his Eat the Press weekly commentary show; she said the previous curriculum of the school had “lots of diversity [and] lots of multicultural materials” as opposed to the new “radicalized” one, which sees CRT implicit throughout.

“It is causing great harm and racial divide and hostility between children, and it really has to stop,” she added.

Bessinger agreed no official sessions are dedicated to CRT education – allowing the school to deny it is being taught- she noted the situation is even direr, with CRT permeating the entire curriculum.

“It is in the language that we are told to use in our professional development,” she added. “It is absolutely everywhere.”

She also described the drastic “shift” taking place, which sees an entire overhaul of the school’s education materials.

“Just to speak to the fact that our libraries are being dismantled and books are being moved into archaic basement rooms around the school or flat-out thrown out,” she said. “So there’s a whole shift taking place, and we really need to pay attention to this.”

Bessinger describes herself on Twitter as “wanted by the Department of Justice for teaching children how to read, write and think for themselves.”

“I’ve been teaching for 23 years now and … I’ve never ever seen anybody who is a teacher and kind and compassionate, teaching anything other than the entire truth — our entire diverse, multicultural history,” she said, adding that the previous curriculum materials were “filled with all kinds of diverse materials.”

“So to suggest that we were not teaching a diverse curriculum is a lie, a flat out lie,” she added.

She goes on to describe her experience after protesting the new material.

“It was sometime last January I noticed that the books and textbooks and materials were all like, I couldn’t recognize them,” she said. “I noticed also that huge chunks of our curriculum materials were removed, like the Holocaust, for example — we were no longer teaching the Holocaust — so there was cause for alarm early on.”

“By the end of the school year, I decided I had to write about this and tell the story because to erase our past, to eliminate our past — I could see a pattern occurring that somehow our culture and our history and our narrative as Americans was changing and that alarmed me and scared me,” she added.

Following her return to school after writing about the issue, Bessinger described the “intimidation” and “bullying” she encountered as a result of speaking out:

When I returned back to school in September, several of my colleagues were quite hostile towards me, not everyone — many people reached out to me in private in support — but you have to understand there’s a culture of intimidation, bullying and harassment if you dare speak out against this regime or against this network of educators coming from the federal government on down.

Her critics “upped the ante” and involved school children when the intimidation didn’t work.

“Once they turn children against you and kids start believing this narrative that you are somehow racist, then it’s over,” she said.

“And that was probably the moment in time when I wrote to my administration to say there’s a great deal of hostility occurring at my school,” she added, “and rather than mitigate the situation, they moved me to another location and basically removed me from all my teaching duties.”

As Bessinger continued, she detailed educators’ repercussions when speaking out against CRT.

“I’m being paid for not teaching while there’s a teaching shortage,” she said.

“And as an expert being a reading and writing teacher, I think it’s important that the taxpayers need to know that this is happening to anyone who goes against this regime or this whole sort of political agenda,” she added.

Bessinger refused to resign; as a result, she noted the importance of doing what’s right and letting the world know the truth of what’s occurring in school.

“I’m going to stay and do what I feel is right for my own children, for the students, and ultimately for the country,” she said. “Because what is happening currently is wrong, and it needs to be exposed, and the world needs to know.”

Bessinger argued that the country would be unrecognizable if the schools continued changing without resistance.

“Because if they do win … I don’t believe we’re going to recognize our country if this is allowed to take place because the culture is changing from within our schools, and it’s changing rapidly.”

In recent months, the CTR battle has led to nationwide tension.

Earlier this month, a Science, Technology, Engineering, Math (STEM) educator and administrator in the largest school district in Indiana addressed parents in a video in which he asserted when school officials say they are not teaching CRT, “we’re lying.”