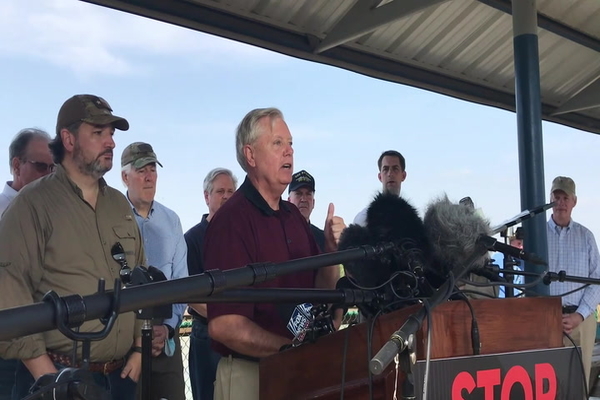 Senator Ted Cruz and 18 of his GOP colleagues inspected a shelter in Donna, TX, which is more than 700 percent capacity with the surge of illegal crossings into the U.S.

On Thursday night, Cruz posted videos on the Rio Grande bank, surrounded by tall grass or weeds. In the dark, watching what he claims were smugglers getting migrants to cross the water and into the U.S.

‘That’s Mexico right over there, and you can see there are three smugglers right there,’ Cruz is heard saying in the video, ‘standing on the Mexico side looking at us.’

He also said those smugglers were taunting the senators on the U.S. side. The footage is hard to see, showing grass and the dark river with a few flashes of light. Cruz said those were the smugglers’ flashlights.

Cruz said, “So you work for the commissioner. You’re a senior adviser. You were hired two weeks ago, and you’re instructed to ask us to not have any pictures taken here because the political leadership at DHS does not want the American people to know it.”

The staffer responded, “Please don’t treat the people as such.”

Cruz said, “Your policies are unfortunately trying to hide them. I understand that you were instructed. I respect them, and I want to fix this situation and the administration.”

Sen Mike Braun (R-IN) told The Washington Examiner that a Biden aide who accompanied the group on tour gave direction.

‘There was one of Biden’s representatives. I felt sorry for the lady because she actually talked to me about deleting a picture, but by the time she got to me, all those other pictures were taken, and that shows you the hypocrisy,’ Braun said Saturday.

Border Patrol officials inside the shelter urged the GOP Republicans not to snap any images, Braun added.

Braun claimed, “They are telling us that because they had to.”

Despite promising ‘transparency,’ Biden officials have refused to let journalists into the overcrowded Donna facility – as criticism surrounding the border crisis continues to grow.

Refusing to abide by the request, Republicans instead shared the images to social media.

‘None of us would have gone down there if we were going to be muzzled,’ Braun claimed.

Sen. James Lackford (R-OK) and others share the hard-to-watch images of the facility in Donna, Texas.

“I know why President Biden doesn’t want the media to be here – because we do have an open border,” Lankford stated on Friday.

‘If you were an unaccompanied minor, you were sent over to the Donna facility, which we went over and visited. That facility is designed for 80 people in a pod, and they had 709 people… literally wall to wall in every one of the little plexiglass cells that they have, and people flooding out into the hallway,’ Lankford said.

Biden insists his policies are not responsible for the surge of illegal crossings at the border.  New facilities to house and process migrants are coming.

I’ve been working from the moment this started to happen to try to find additional access for children to be able to safely — not just children, but particularly children — to be able to safely be housed while we follow through on the rest of what’s happening,’ Biden said at a press conference on Thursday.

Conditions at the Donna facility are described as “inhumane” by Cruz and other Republicans.  The crisis will not end without more vigorous enforcement at the border and swift removal of illegal crossings.

‘All of us today witnessed the Biden cages. What is occurring here on the border is heartbreaking, and it is a tragedy,’ Cruz said.

‘The Biden administration is taking people who are testing positive for COVID-19 and locking them in cages side by side. This is inhumane,’ Cruz said.

Cruz said that 10 percent of the current population of the Donna facility currently tests positive for COVID-19.