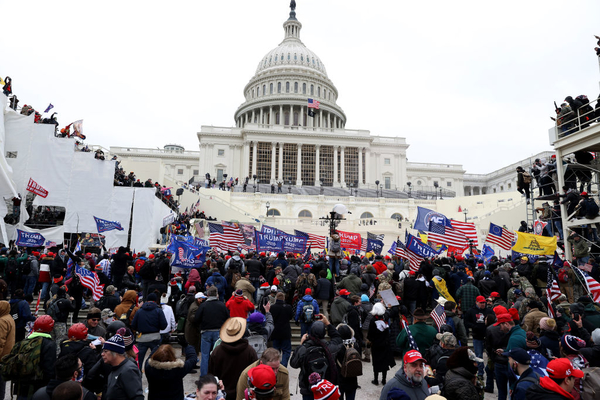 Protester at Capitol January 6, Ryan Samsel was “severely beaten” by correctional officers and is now “blind in one eye” and “has a skull fracture” and a “detached retina,” according to his attorney.

Allegedly Samsel was also subject to racial abuse by “minority” officers; one told him, “I hate all white people and your honky religion.”

Samsel’s story is just one of many detailing vicious torture and abuse to Capitol protestors.  Some have been detained for nearly three months now.

Tensions are running high between guards and inmates at a D.C. jail housing many of the defendants in January 6 cases, with at least one of those prisoners alleging that he was brutally beaten by correctional officers.

For weeks, Capitol riot defendants being held in Washington have complained that they are locked in their cells with virtually no human contact for 23 hours a day. But a startling, graphic account offered publicly in court on Tuesday by one such inmate, Ronald Sandlin, went further: alleging that guards have subjected those charged in the January 6 events to violence, threats, and verbal harassment.

“Myself and others involved in the January 6 incident are scared for their lives, not from each other but from correctional officers,” Sandlin said during a bail hearing conducted by video before U.S. District Court Judge Dabney Friedrich. “I don’t understand how this is remotely acceptable,” he added, saying he was being subjected to “mental torture.”

In an unusual direct plea to the judge, Sandlin said another Capitol riot defendant, Ryan Samsel, “was severely beaten by correctional officers, [is now] blind in one eye, has a skull fracture and detached retina.”

Sandlin also described racial tension between minority guards and the largely white defendants, some of whom have been publicly accused of membership in or association with white supremacist groups.

Sandlin said guards tackled “to the ground” one high-profile prisoner, Richard Barnett, 60, who was photographed with his boot up on a desk in Speaker Nancy Pelosi’s office. Sandlin said one of the guards declared, “I hate all white people and your honky religion.”

The primarily peaceful protesters smeared by the media as “white supremacists.” Now, “minority” jail guards appear to be convinced they’re taking racial vengeance on them.

Tucker Carlson highlighted this story and others in a segment titled “unequal treatment under the law.”