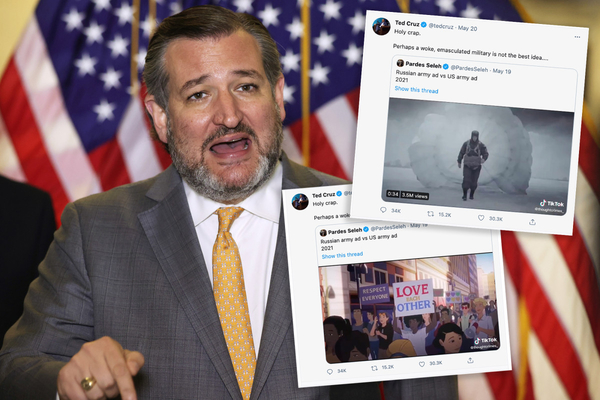 Sen. Ted Cruz (R-TX) fired back at Democrats and “woke media” in a tweet Friday. Claiming he was attacking the United States military when he criticized the latest recruitment campaign of the Army.

“I’m enjoying lefty blue checkmarks losing their minds over this tweet, dishonestly claiming that I’m ‘attacking the military.’ Uh, no. We have the greatest military on earth, but Dem politicians & woke media are trying to turn them into pansies,” he tweeted.

He added, “The new Dem videos are terrible,” in reference to the recruitment campaign. The campaign consists of five anime videos highlighting soldiers who are either female, minorities, or both, and conspicuously does not include a white male.

The Army recruitment video has that has received the most attention features a young white female soldier who talked about growing up with two lesbian mothers and participating in pro-LGBT rallies.

Progressives attacked Cruz’s tweets suggesting he was criticizing the U.S. military or praising the Russian army.

Sen. Tammy Duckworth (D-IL) – wounded combat veteran – tweeted: “Holy crap. Perhaps a U.S. Senator shouldn’t suggest that the *Russian* military is better than the American military that protected him from an insurrection he helped foment?”

Many progressive members of the military and veterans went after Cruz from anonymous accounts since there are regulations in the military limiting political speech while serving active duty.

The soldier whose story was featured in the Army ad, Army Cpl. Emma Malonelord retweeted some of the criticism from her Twitter account, including a tweet that said:

MilTwitter is going in on some boomer f*ck who cannot fathom that an organization can be inclusive and lethal at the same time.” The account was anonymous, but its profile said: “All views are mine & dont reflect those of the Army.

“MilTwitter” is a reference to the group of primarily progressive veterans and service members on Twitter.

This is not the first time Cruz ignited the progressive veterans and service members. Cruz requested a meeting with senior military leaders earlier this year, after they attacked Tucker Carlson on Twitter, for criticizing the military on his political opinion show.

Carlson had criticized the U.S. military for focusing on accommodating females. In contrast, China was focused on building a larger navy, and progressive veterans and service members pleaded for senior military leaders to weigh in. Many of those leaders did, personally attacking Carlson and suggesting he could not criticize the military since he did not serve himself — which goes against the foundational American tenet of civilian rule over the military.

Political bias in the military is under scrutiny by House Republicans. This week 24 Republicans signed a letter demanding Air Force lieutenant colonel be reinstated after he was fired for waring that marxism and critical race theory spread in the military.