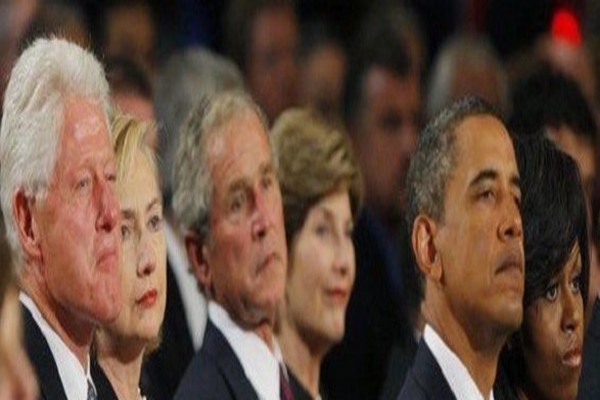 A non-governmental organization (NGO) backed by former Presidents Clinton, GW Bush, and Obama, along with first ladies Hillary, Laura, and Michelle, is closely working with Joe Biden to resettle tens of thousands of Afghan refugees around the United States.

Welcome, US, was launched by former staffers of Clinton, Bush, and Obama with the former presidents serving as honorary chairs with backing from Rockefeller Philanthropy Advisors, which has ties to billionaire George Soros.

The NGO also works with multinational corporations like Airbnb, Walmart, Starbucks, Instacart, Facebook, Microsoft, and Chobani to provide financial assistance to the relocated Afghans. All while the US Chamber of Commerce is working to give Afghan refugees jobs.

In an interview with National Public Radio (NPR), an official with Welcome.US states that the NGO is in close contact with former Delaware Gov. Jack Markell (D), whom Biden has put in charge of facilitating the massive Afghan resettlement operation.

“We’re in touch with Governor Markell five times a day,” Welcome.US’s John Bridgeland, who previously worked as a top aide for Bush, told NPR. “… it’s going to be really hard, and it’ll be uneven, but Markell is setting this up for a better chance of a response than we’ve had in the past.”

The Afghans are being brought to one of eight US military bases that have been transformed into refugee camps without completing their immigration processing.

Currently, about 53,000 Afghans live temporarily on US bases, and the Biden administration is planning to bring an additional 14,000 Afghans to the US for resettlement in the next week. The administration aims to resettle at least 95,000 Afghans across 46 states and in more than 200 American communities.

Republicans are aiding Biden’s resettlement in the House, Senate, and GOP governors.

Eighteen Republican governors have urged the Biden administration to resettle Afahns in their states, while 49 House and Senate Republicans have voted with Democrats to approve $6.4 billion of taxpayer money for welfare, cash assistance, and driver’s licenses for the newly transferred Afghans.

Refugee resettlement costs taxpayers nearly $9 billion every five years. Throughout a lifetime, taxpayers pay about $133,000 per refugee, and within five years of resettlement, roughly 16 percent will need taxpayer-funded housing assistance.