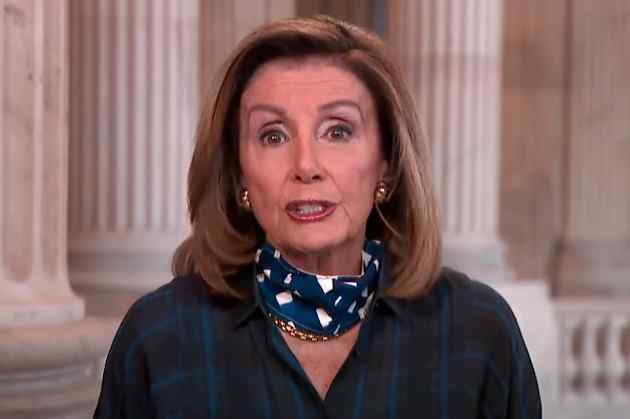 (Liberty Bell) – If there is a single word that could be used to describe Nancy Pelosi’s tenure as House Speaker for the ‘19-’21 session of Congress, it’s “obstruction.”

As Democrat Speaker of the House with a Republican Senate and Executive, she could have had the opportunity to bring real healing to our country and work across the aisle on things like criminal justice and police reform, health care, and the economy.

Instead, she has used the time to try to undermine the Trump presidency and push radical progressive policies through the House that never had a chance of seeing the light of day in the Senate.

Of course, during her time as Speaker, there has been a shadow Speaker who we all know is calling all the shots: radical socialist Rep. Alexandria Ocasio-Cortez, who has come out in full swing calling for Americans to radicalize in response to the death of Supreme Court Justice Ruth Bader Ginsburg.

Pelosi, meanwhile, has no ability to obstruct the confirmation process of whoever Trump may nominate to replace Ginsburg on the court in the very short amount of time we have between now and the election.

She does have the ability to cause further obstruction from the House, however. Remember, the previously lowest point of her time in Congress was when she allowed the radical, baseless impeachment of President Donald Trump.

Amazingly, she may be prepared to do this all over again…

Speaking with ABC’s “This Week” on Sunday, the Speaker declared that the Democrats have “arrows in our quiver,” when she was asked if it was possible to prevent a Trump nomination to the high court ahead of the election.

Anchor George Stephanopoulos said, “Let me press you though on what happens. You want people to get out and vote. And even that’s no guarantee that the White House and Senate Republicans won’t try to push through a Supreme Court nomination in a lame-duck session even if Joe Biden wins on November 3rd, even if Democrats win, pick up seats in the House, and maybe even the Senate. So what can you do then? Some have mentioned the possibility if they try to push through a nominee in a lame-duck session that you and the House can move to impeach President Trump or Attorney General Barr as a way of stalling and preventing the Senate from acting on this nomination.”

Pelosi replied, “Well, we have our options. We have arrows in our quiver that I’m not about to discuss right now, but the fact is we have a big challenge in our country. This president has threatened to not even accept the results of the election with statements that he and his henchmen have made. So right now, our main goal and I think Ruth Bader Ginsburg would want that to be to protect the integrity of the election, that we protect the American people from the coronavirus.”

When Stephanopoulos insisted, “To be clear, you’re not taking any arrows out of your quiver and not ruling anything out.”

Pelosi said, “Yeah, we have a responsibility. We’ve taken an oath to protect and defend the Constitution of the United States. We have a responsibility to meet the needs of the American people. That is when we weigh the equities of protecting our democracy requires us to use every arrow in our quiver.”

Meanwhile, AOC, the real Speaker, is openly calling for impeachment, to the apparent approval of Senate Minority Leader Chuck Schumer.