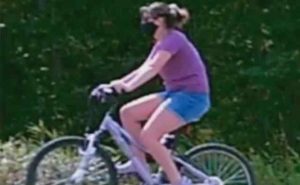 (Infowars) – Police in Maine are searching for a woman they say is delivering dog poop to Trump supporters.

The unsolicited packages were delivered by bicycle over the weekend in the town of Hampden, where cops say a serial pooper with a serious anti-Trump bent is on the loose.

“She has been picking up dog feces and putting it in mailboxes, specifically of people who have Trump signs outside,” one Hampden police officer told WGME, adding “and she has been also defacing Trump signs, writing comments on the signs.”

The officer noted political vandalism, in addition to inserting feces in mailboxes, are both crimes punishable by law.

Police are asking the public to be on the lookout for the woman, last seen riding a purple bike while wearing purple Crocs.

A Massachusetts man installed an electric fence around the Trump 2020 sign in his front yard to keep potential thieves from stealing it.

John Oliveria, of New Bedford, said he installed the fence because six of his Trump 2020 campaign signs have been stolen from his lawn since May, KCTV reported.

“It’s a shame I have to do this,” said Oliveria. “I believe in the president. Obviously, people didn’t like it.”

Oliveria, a 20-year veteran of the Navy and member of the New Bedford School Committee, said he had enough and it was time to take charge of things after he filed two police reports about the sign thefts.

Since he installed the 3-1/2 foot fence, the 54-year-old disabled veteran said his sign has remained untouched.

Oliveria was a lifelong Democrat who recently changed his party affiliation to Republican, and said he would never go around stealing signs for the opposing candidate.

“That’s what our country is about. Different opinions and voicing them in a fair and equitable manner. Taking a sign is not fair and equitable,” said Oliveira. “You have to be able to respect each other or we won’t be able to accomplish anything if we don’t. Don’t mess with my right to free speech.”