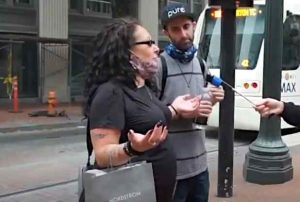 Many of the vehicles were attacked by leftists on their way into the city.

And then later that night one Trump supporter Jay Bishop, whose real name is Aaron Danielson, was gunned down in cold blood by far left antifa member Michael Reinoehl from Oregon.

Reinoehl walked up behind Aaron Danielson (Jay Bishop) and shot him dead in the street.

Michael Reinoehl was later killed in a shoot-out with police.

On Thursday The First TV published video of a Portlan woman asked about the cold-blooded murder of Trump supporter in Portland.

The woman responded, “Tough luck. Don’t be a f**king Trump supporter in Portland.”

They want us all dead.