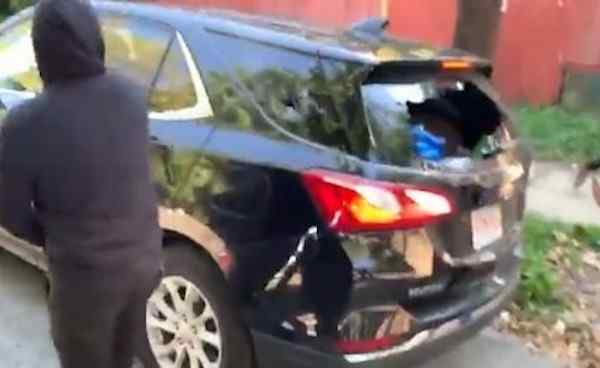 When the Proud Boys did not show up, they attacked conservative independent media instead.

As the Gateway Pundit reported earlier in the day, the militant leftists attacked two conservatives who were filming the protest. They also attacked a vehicle they believed to belong to the conservatives, but actually belonged to someone who was there in support of their cause. There was a frightened dog inside while they smashed the windows out with hammers.

Above: A frightened dog appears after Antifa thugs smashed rear window of car with a hammer in Philadelphia, screen image via Kalen D’Almeida/Twitter Sept. 19.

Speaking to the Gateway Pundit about the fake rally, Proud Boys leader Enrique Tarrio said that “SOMETIMES…all it takes for evil to fail is for good men to do nothing.”

“The Philly ProudBoys decided this was the best approach today. They wanted to show the world exactly what unchecked domestic terrorism does to a city. It’s incredibly sad that in 2020 America all someone has to do to be threatened with violence is say they’re going to a park to practice their first amendment rights. Besides attacking journalist that were on the scene they attacked themselves. They beat and broke windows on what seemed to be a vehicle owned by an Antifa militant. So I’m extremely Proud of my boys today. Some of these boys had a hangover and watched Antifa on Antifa violence from the comfort of their living rooms,” Tarrio said.

The Proud Boys have also launched a new website opposing Antifa, where you can keep track of their upcoming rallies.

“The threat from Domestic terror groups like Antifa and BLM are on the rise. That is why we started EndAntifa.com. The ProudBoys will return to Portland on the 26th of this month despite the death threats and calls for violence,” Tarrio said. “We intend to have a peaceful event and shine even more light on these acts of terror. The reason why Philly is so violent is because they have taken a page from the Portland playbook. It’s time for the mayhem to end…The American people have had enough.”