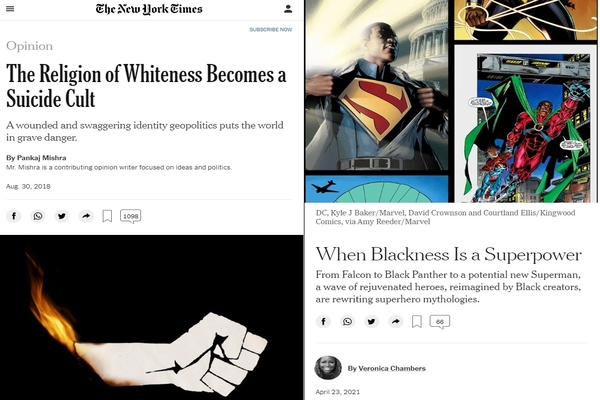 The exciting contrast between these two articles from the New York Times.

The first article from 2018, “The Religion of Whiteness Becomes a Suicide Cult,” argued that white people stole everything they have and will destroy the planet.

New York Times contributor Damon Young just a few weeks ago wrote a column for The Root stating that “whiteness is a pandemic” and ” the only way to stop it is to locate it, isolate it, extract it, and kill it.”

The second article from Friday, “When Blackness is a Superpower,” argued that black people stealing white comic book characters and recasting them as black will save the world.

In fact, the notion of Harriet Tubman as a superhero is a favorite subject of comic book fan art. She is also the subject of a graphic novel series by David Crownson, funded by a Kickstarter campaign.

The slave catchers aren’t just evil: They’re vampires. Harriet Tubman doesn’t just defend the people she’s guiding to freedom; she wields katanas and wordplay to outwit and overcome the white men who see her and her people as mere chattel.

All of these heroes are, in their own way, fighting for an equality that seems ever elusive. For Spellman, the opportunity to write stories about Black superheroes is part of a concerted effort to tip the scales.

“I absolutely believe that this helps re-contextualize us in a more universal way,” he said. “If we are first and foremost perceived as less than, and I do believe that everybody on the planet looks at us that way, a superhero is greater than. That primal math, via a megaphone like Marvel — that’s powerful.”

Note how the Times capitalizes “Black” but not “white.”