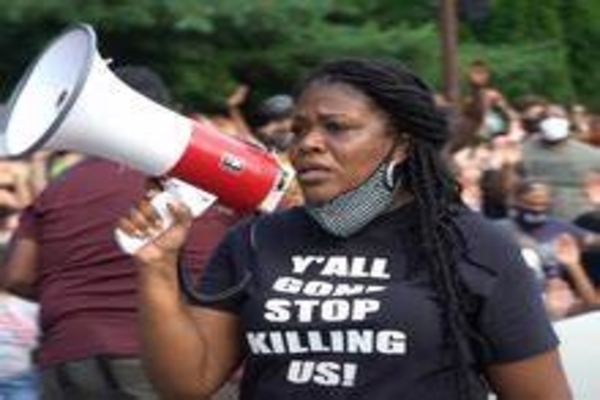 On Monday, Manchin, one of the key Democrat swing votes in the Senate, said he would not consider voting for the Build Back Better Act without knowing the bill’s impact on inflation and the deficit.

Manchin said, “This is a recipe for economic crises.”

Bush distrusts Manchin’s beliefs in what America needs in the Build Back Better Act.

“I trust the scientists who have shown us what our future will look like if we fail to meaningfully address the climate crisis. I trust the patients and doctors crying out for comprehensive health coverage for every person in America,” she said.

“When I promised St. Louis a historic investment in children, in our seniors, in housing, and in our schools, I said that I would do everything I can to actually deliver change that our community can feel,” she added.

The progressive Democrat declared, “Joe Manchin’s opposition to the Build Back Better Act is anti-Black, anti-child, anti-woman, and anti-immigrant. When we talk about transformative change, we are talking about a bill that will benefit Black, brown, and Indigenous communities.”

“Those same communities are overwhelmingly excluded from the bipartisan infrastructure bill. We cannot leave anyone behind. Senator Manchin must support the Build Back Better Act,” she added.

This is not the first time a progressive Democrat has played the race card in the infrastructure negotiations.

That’s why folks can sometimes come across as careless when saying “well isn’t something better than nothing?” For many communities, their not having a seat at the table is a precondition for bipartisan deals to work in the 1st place. & that’s not only seen as normal but valued. Meanwhile, when representatives of excluded communities object to the exclusion &marginalization required to make many bipartisan deals work, they’re dismissed as “unreasonable.”