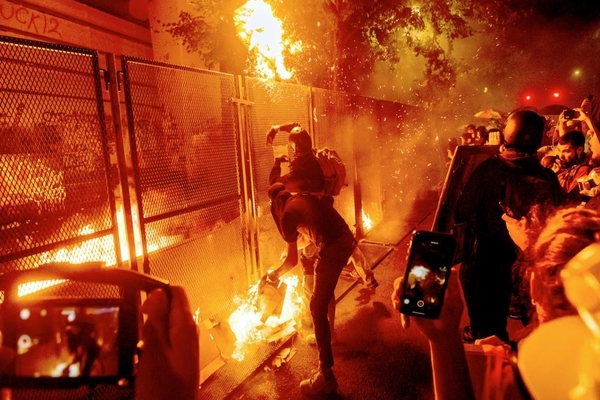 Over the weekend, in Democrat-run Portland, Antifa tried to burn government buildings with people in them… In Democrat-run Minneapolis, Black Lives Matter rioted, looted, and burned.

A weekend in Rural MAGA Land, in a word, blissful. There was no looting, shootings, or riots. No racial tensions. The air and water are clean.

Isn’t it odd how we Trump voters are relentlessly smeared as violent, racist, and anti-environment, and yet, out where we all live and all own guns, it’s peaceful, there are no racial problems, and our air, water, and streets are safe and clean?

Meanwhile, Democrat-run Portland — where Democrats have had a monopoly on power for decades — is on fire again.

After almost a year of non-stop rioting, Antifa terrorists are still lighting government buildings on fire without fear of punishment because Portland is run exclusively by Democrats who refuse to prosecute Antifa. Democrats consider Antifa to be their brownshirts.

Meanwhile, Democrat-run Minneapolis, where Democrats have had a monopoly on power for decades, is on fire again.

It comes just a little over a year after the Democrat-run Minneapolis, where there were riots and lootings over George Floyd’s death, who died in police custody. A new wave of rioting has been launched after Minneapolis police shot and killed a 20-year-old man during a traffic stop on Sunday.

Various news reports and social media posts show left-wing terrorists in Black Lives Matter, numbering in the hundreds, back at it.

Officers repeatedly ordered the crowd of about 500 to disperse as protesters chanted Wright’s name and climbed atop the police headquarters sign, by then covered in graffiti. Police used tear gas, flashbangs, and rubber bullets on the crowd.

Looting was widespread late Sunday into early Monday, spilling into north and south Minneapolis. Reports said that stores in Uptown and along Lake Street were also being looted.

You get what you vote for, and Portland and Minneapolis are getting everything they want and deserve.