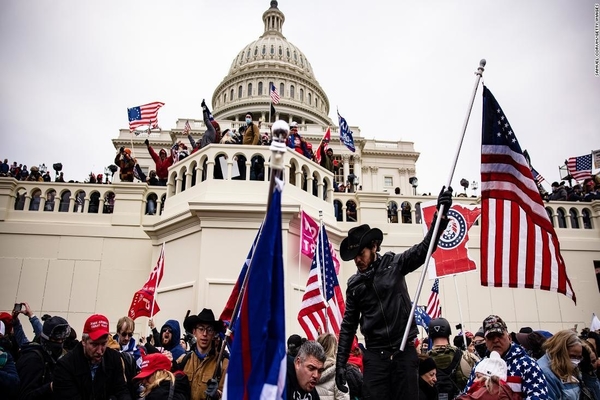 According to a recently released report from Politico, the decision by DOJ to let a bunch of Portland rioters off with merely a slap on the wrist may make the blatant political persecution of Capitol protesters more difficult.

From Politico, “Leniency for defendants in Portland clashes could affect Capitol riot cases”:

Federal prosecutors’ show of leniency for some defendants charged in the long-running unrest in the streets of Portland could have an impact on similar criminal cases stemming from the Capitol riot, lawyers say.

In recent weeks, prosecutors have approved deals in at least half a dozen federal felony cases arising from clashes between protesters and law enforcement in Oregon last summer. According to defense attorneys and court records, the arrangements — known as deferred resolution agreements — will leave the defendants with a clean criminal record if they stay out of trouble for a period of time and complete a modest amount of community service, according to defense attorneys and court records.

Some lawyers attribute the government’s newfound willingness to resolve the Portland protest cases without criminal convictions to the arrival of President Joe Biden’s administration in January and policy and personnel changes at the Justice Department.

Biden appointed, head of DOJ, Merrick Garland during his confirmation hearings in February said, the Portland riots were no big deal because they happened at night!

Five of the Portland cases in which deals were recently struck involved a felony charge of interfering with police during civil disorder. Some defendants are accused of punching or jumping on police officers during the street battles. One individual was charged after being accused of shining a high-powered green laser into the eyes of officers seeking to disperse a riot outside a police union building.

The civil disorder cases are notable because the charge of police interference is also being wielded by prosecutors in dozens of the criminal cases brought over the storming of the Capitol on Jan. 6 by pro-Trump protesters. In the Washington cases, prosecutors have filed the felony anti-riot charge in tandem with others, like obstructing an official proceeding or assaulting police officers.

Some of the assaults described in the Portland cases bear similarities to the Capitol violence. Prosecutors said one of the civil disorder defendants, Alexandra Eutin, used a wooden shield and hoses to strike a Portland police officer in the head while he was trying to make an arrest. Several Capitol riot suspects are accused of using riot shields to shove police or obstruct their efforts to secure the building from the mob.

Another Portland case recently settled through a deferred resolution agreement involved Alexa Daron Graham, who was indicted last September on a federal felony charge of pointing a laser at a small plane that the Portland Police Bureau flew during the unrest. A court filing last month said the case against Graham would be dismissed in December if she complied with the terms of the agreement.

The Biden administration offered a plea deal to the BLM lawyer who threw a Molotov cocktail at a police cruiser in New York last year.

One defense attorney in Washington representing Capitol riot defendants said he planned to raise the Portland cases as negotiations begin between the government and defendants over those arising from the Capitol.

“I think they’re very relevant,” said the defense lawyer, who spoke on the condition of anonymity. “The individual conduct is actually not all that different: You’re at a protest that turns into a riot. … The core conduct is the same, so if people out there are getting deferred prosecution for that conduct, then my guy should be.”

There are already signs the Portland deals could create contrasts or anomalies with the Capitol cases. While the Portland defendants now face no jail or criminal conviction in connection with assaulting law enforcement, prosecutors in Washington have sought pretrial detention in virtually all the Capitol riot cases involving alleged assaults on police.

Politico reported last week that many Capitol protesters are being held indefinite detention and solitary confinement for 23 hours a day, and some have been “severely beaten” by DC correction officers who told them they “hate all white people.”

Judges have indicated they are trying to make sure that they avoid inconsistencies in the way they handle the hundreds of Capitol cases. It is less clear whether and how that principle will apply when comparisons are made with prosecutions unrelated to the Jan. 6 riot.

“It’s very important to me that individuals who are charged with similar conduct are treated similarly,” Magistrate Judge Michael Harvey said at a bond hearing on a Capitol riot case last week. “The challenge for judges on this court is to be consistent.”

During his monologue Wednesday night, Tucker Carlson said America now has “two systems of justice– one for the allies of the people in charge and one for their enemies.”