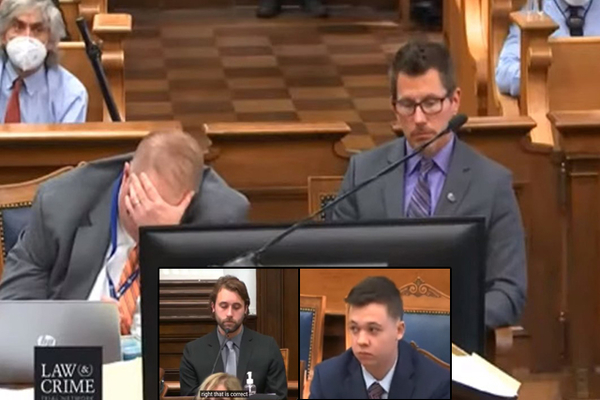 (IL) – Leftist protester Gaige Grosskreutz admitted under cross-examination on Monday that it wasn’t until he “pointed” his gun at Kyle Rittenhouse and “advanced on him” that Rittenhouse shot him in the arm.

Grosskreutz’s stunning admission led the regime’s prosecutor to bury his face in his hand.

“I thought the defendant was an active shooter,” the 27-year-old Grosskreutz said. Asked what was going through his mind as he got closer to the 17-year-old Rittenhouse, he said, “That I was going to die.”

Rittenhouse shot Grosskreutz in the arm, tearing away much of his bicep — or “vaporized” it, as the witness put it.

Under questioning from the prosecution, Grosskreutz said he had his hands raised as he closed in on Rittenhouse. Prosecutor Thomas Binger asked Grosskreutz why he didn’t shoot first.

“That’s not the kind of person that I am. That’s not why I was out there,” he said. “It’s not who I am. And definitely not somebody I would want to become.”

But during cross-examination, Rittenhouse defense attorney Corey Chirafisi asked: “It wasn’t until you pointed your gun at him, advanced on him … that he fired, right?”

[…] Grosskreutz said he had gone to the protest in Kenosha to serve as a volunteer medic, wearing a hat that said “paramedic” and carrying medical supplies, in addition to a loaded pistol.

Grosskreutz said his permit to carry a concealed weapon had expired and he did not have a valid permit that night.

“I believe in the Second Amendment. I’m for people’s right to carry and bear arms,” he said, explaining why he was armed. “And that night was no different than any other day. It’s keys, phone, wallet, gun.”The AP laughably called Grosskreutz a “shooting victim” in their headline.

The only victim in this case is Kyle Rittenhouse who was separated from his family and run through the wringer for over a year for shooting a suicidal child sex offender who tried to charge him and take his gun, another criminal who jump-kicked him and attacked him with a skateboard, and Grosskreutz who pointed a gun at him and advanced on him only to be disarmed with a single bullet (which in fact spared his life).

It’s the regime’s prosecutors who should be brought up on charges for malicious prosecution!

We’re seeing similar malicious prosecutions in the cases of Army Sgt Daniel Perry, who shot a leftist protester who approached him aggressively and allegedly raised an AK-47 at him, and Gregory and Travis McMichael, who shot Ahmaud Arbery after he charged them and tried to take their gun!