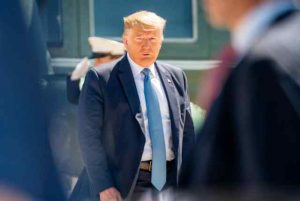 A PACKAGE CONTAINING THE POISON RICIN AND ADDRESSED TO PRESIDENT DONALD TRUMP WAS INTERCEPTED BY LAW ENFORCEMENT EARLIER THIS WEEK, ACCORDING TO TWO LAW ENFORCEMENT OFFICIALS.

TWO TESTS WERE DONE TO CONFIRM THE PRESENCE OF RICIN. ALL MAIL FOR THE WHITE HOUSE IS SORTED AND SCREENED AT AN OFFSITE FACILITY BEFORE REACHING THE WHITE HOUSE.

THE FBI AND SECRET SERVICE ARE INVESTIGATING THE MATTER.

Officials believe the package was sent from Canada.

“Ricin is a poison derived from castor beans and exposure to it can be deadly. According to the Centers for Disease Control and Prevention, if inhaled or ingested, ricin can cause vomiting, diarrhea and respiratory problems. There is no antidote,” the Wall Street Journal reported.

The disturbing announcement comes just a day after Ruth Bader Ginsburg passed away on Friday.

In 2018, Donald Trump Jr. and his wife received suspicious letters containing a white powder, which was later determined to be harmless.

The man who sent those letters was arrested and sentenced to five years probation.